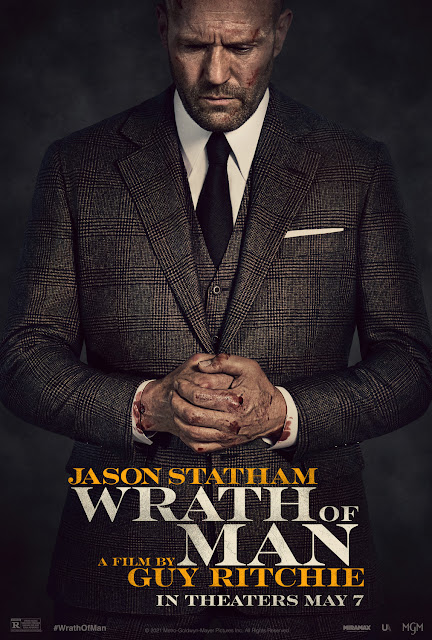 Mysterious and wild-eyed, a new security guard for a cash truck surprises his co-workers when he unleashes precision skills during a heist. The crew is left wondering who he is and where he came from. Soon, the marksman's ultimate motive becomes clear as he takes dramatic and irrevocable steps to settle a score.

Rated R for strong violence throughout, pervasive language, and some sexual references

Wrath of Man, Guy Ritchie and Jason Statham forth film together is a bit of a mixed bag of a crime drama.  Ritchie style is less flashy and more focused here but it only partially works since there seem to be a strange disconnect between him and the actors.  The style is slick but each of the actors delivers their lines in the stiffest and most wooden manner possible.  This works for Statham since it’s pretty similar to his usual delivery but it doesn’t quiet work for the rest of the cast.  To his credit, Statham performance is appropriately steely and determined throughout even though he disappears off screen for a big chunk of the film after it’s opening act as the story adopts a Rashomon style of storytelling.  While a solid choice for the story’s plot but none of the other characters are quiet as interesting or engaging as Statham’s H since the other characters are fairly one dimensional.  The story itself is nearly as clever as it thinks it is as all the reveals are fairly predictable from the start.  The impressive part of the film that it overcomes it’s shortcomings by being continually watchable and engaging, so much so that you can ignore some of its massive plot holes and paper thin characters.