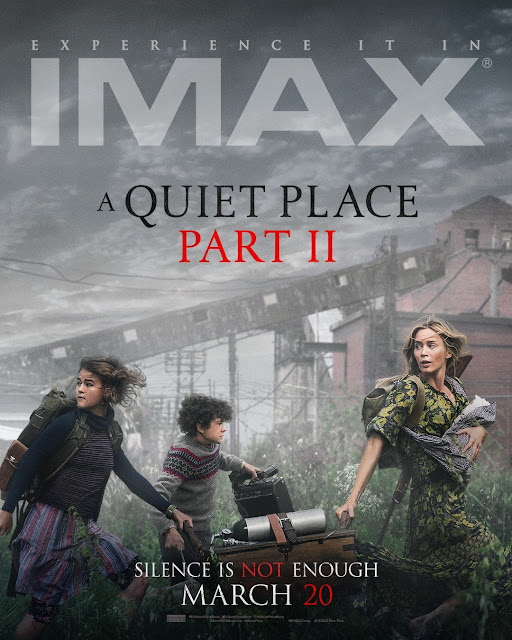 Following the deadly events at home, the Abbott family must now face the terrors of the outside world as they continue their fight for survival in silence. Forced to venture into the unknown, they quickly realize that the creatures that hunt by sound are not the only threats that lurk beyond the sand path.

A Quiet Place Part II is a solid if flawed follow up to beloved original.  John Krasinski turns in another impressive directorial effort with this well constructed exercise in a tension building.  The pretense of not seeing the monsters being exhausted in the original leave the door open for more monster action.  Smartly, Krasinski doesn't go totally overboard by forgoing tension for all out action.  The set pieces are impeccably constructed with a smart use of setting and sound to deliver jump scares that feel anything but cheap.  The cast is equally strong with Millicent Simmonds taking a more central role in this entry.  Simmonds displays some impressive acting chops even when she's onscreen with actors like Emily Blunt and Cillian Murphy.  Blunt's character takes more of a secondary role here but she still manages to shine in her limited screen time.  Cillian Murphy is appropriately intense even though his character feels terribly underwritten.  Murphy does what he can with the role but the character is simply there to advance the story and little more even though there are nuggets of backstory which are never expanded on.  Djimon Hounsou is just as underused in what amounts to a throw away role, written with little to no depth.  Ultimately, the script is this sequels biggest drawback by delivering thinly written supporting characters and character who simply do incredibly stupid things for no good reason.  The original benefited from Krasinki's strong direction, excellent central performances and a simple but efficient script with some logical leaps you could overlook.  A Quiet Place Part II works on most of the same levels but the script and story here are far more lacking.