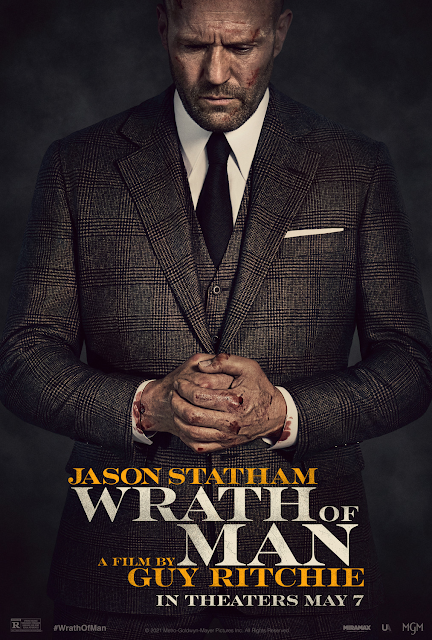 My dear reader(s), this week it was back to the cinema (yay!) for one thing that always gets me there: Jason Statham. On the docket: Wrath of Man.

Honestly being the best policy and all that, I shall go on record as saying Wrath of Man is just the sort of testosterone-fueled bloodbath I want to see when I go to the pictures. I'm a woman of simple tastes, and watching Jason Statham beat the crap out of people is one of my favorite things.

Wrath of Man is directed and co-written by Guy Ritchie, and - while it is not incapable of surprising - its general nature is reasonably predictable if you like Guy Ritchie. (I like Guy Ritchie.) The non-linear plot seems muddled at times, some of the dialogue is cringey, and the whole is a bit humorless, but Wrath of Man is still exciting and entertaining.

Statham is in top form, a strong, mostly silent type who carries the film easily. It's always a pleasure to see Holt McCallany in anything, and the rest of the supporting cast is fine for what's asked of them. (If we're being honest, I probably would think Josh Hartnett and Scott Eastwood were the same person if one of them hadn't made out with Reeve Carney for the TV cameras some years back.) The film is well paced, it doesn't outstay its welcome, and a menacing score by Christopher Benstead perfectly accentuates its dark tone. It's not a game-changer, but Wrath of Man is more than enough reason to get on out to the movies.

Wrath of Man clocks in at 118 minutes and is rated R for "strong violence throughout, pervasive language, and some sexual references."

A strong lead, maximum carnage, and a twisty plot make Wrath of Man a thrilling yarn. Of a possible nine Weasleys, Wrath of Man gets seven.