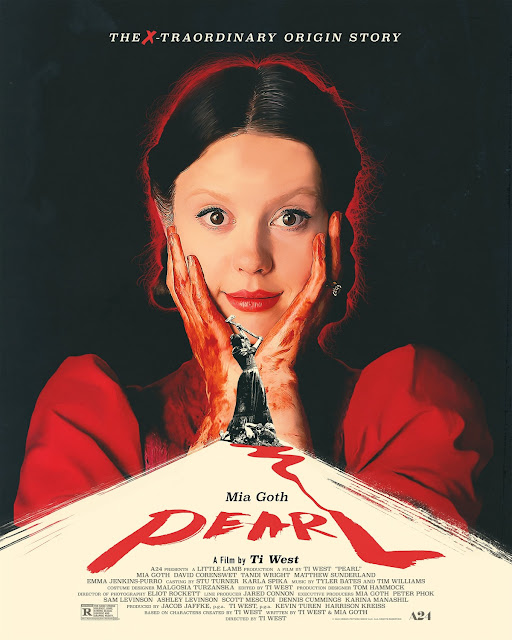 Trapped on her family's isolated farm, Pearl must tend to her ailing father under the bitter and overbearing watch of her devout mother. Lusting for a glamorous life like she's seen in the movies, Pearl finds her ambitions, temptations, and repressions all colliding in this origin story of X's iconic villain.

Ti West's X was one of the biggest and most welcome  surprises of the year.  It was the first modern film to truly capture the feel of the original Texas Chainsaw Massacre before going on it's own path in the final act.  Incredibly, West and Mia Goth plotted out, wrote and shot a prequel right after finishing up X.  The speed of it all can make wonders if they would simply rehash the same material in a different time period but thankfully Pearl is very much it's own thing and stands on its own two feet.  This entry is more of a character study that allows us to witness the gradual decent into madness the central character goes through.  West's film is beautifully shot with plenty of nods and visual cues to classic filmmaking especially The Wizard of Oz even though I don't recall Dorothy dry humping the Scarecrow.  The film's aesthetics are wonderful and the story's slow burn approach gives the audience more time to appreciate it and a particularly impressive performance from it's central star.  Mia Goth turns in a simply amazing performance as the titular Pearl.  She drives the film from the opening sequence straight through an incredible 10 minute monologue in the final act that should be shown in acting schools.  Goth dominates the screen but she's aided by an equally impressive turn from Tandi Wright who plays Pearl's imposing and domineering mother.  Wright and Goth share a wonderful sequence together that just sizzles with incredible energy as it builds to a fiery finale.  West and Goth have truly delivered something special that somehow works with the original even though its very much something different and original.

Posted by Daniel at 2:41 PM No comments: 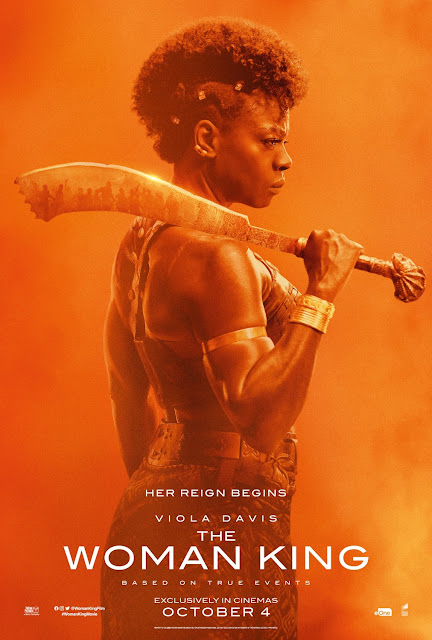 The Woman King is a 2022 American historical epic film about the Agojie, the all-female warrior unit who protected the West African kingdom of Dahomey during the 17th to 19th centuries. Set in the 1820s, the film stars Viola Davis as a general who trains the next generation of warriors to fight their enemies.

The Woman King is a bit of a throwback to old fashion historical epics.  Gina Prince-Bythewood's film hits the standard beats by delivering a handful of well done action set pieces in between quieter moments that make up the larger part of the actual film. She keeps a keen focus on the characters and she gives the audience time to get to know a handful of them.  Viola Davis's General Nanisca gets the lion share of the attention and for good reason. Davis's world-weary façade and imposing physicality make her tailormade for the role.  She's the perfect actress to capture the ferocity of the role while balancing the quieter more vulnerable moments.  Lashana Lynch and Sheila Atim both deliver solid supporting roles as warrior and confidants to Nanisca with each getting plenty of screen time to leave a memorable impression. John Boyega isn't asked do much outside of sound and look regal which he accomplishes with general ease. Thuso Mbedu plays a young woman given to the female troop with her sub plot increasing in importance as the film moves on.  Mbedu does her best, but she feels miscast since she's never able to believably exude the strength her character is supposed to have.  It doesn't help that the script is thin on characterization, giving each character a few traits but very little else in terms of depth. Additionally, there are pacing issues that pop up especially in the final act where the film noticeably drags in spots making it feel much longer than its 2 hour and 15 minute runtime.  Even with its faults The Woman King is a solid addition to the genre anchored by a strong central performance.

Posted by Daniel at 8:40 AM No comments: 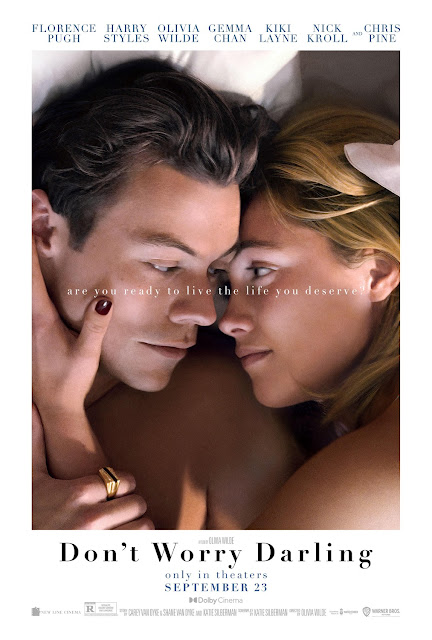 A 1950s housewife living with her husband in a utopian experimental community begins to worry that his glamorous company could be hiding disturbing secrets.

Olivia Wilde's Don't Worry Darling, which has been mired in offscreen drama before its release, is glossy, intriguing in parts, but ultimately little more than a rehash of well-worn tropes.  Wilde, for her part, delivers well-constructed shots which take advantage of the gorgeous sets and wardrobing on display intercut with some cinematic tricks to give it all an unsettling feel.  Unfortunately, there is a lack of subtly right from the start which kills the majority of tension from the central mystery.  That's not to say there aren't twist and turns throughout its overlong runtime but it never takes the material into new thematic territory.  The film's saving grace is Florence Pugh who carries the film with a committed and engaging turn as a wife who feels the walls of reality closing in on her, sometimes literally.  Pugh's authenticity shines through here making you care about her character even though the endgame is fairly obvious.  She's always the most interesting person onscreen especially the script doesn't bother to give any of the supporting characters much depth if any.  Harry Styles, Olivia Wilde, Gemma Chan, KiKi Layne, Nick Kroll and Chris Pine are saddled with one note characters since the film seems content with them serving as nothing more than high end eye candy.  Populating a film with this much talent only to let it go to waste is a huge miss for the film since it could have added far more nuance to its story especially in its increasingly nonsensical final act.  Don't Worry Darling may feel fresh to people unfamiliar with its cinematic forebears like The Stepford Wives, The Truman Show, Pleasantville or Dark City but if you are then it's nothing more than a hollow rehash.

Posted by Daniel at 9:32 AM No comments: 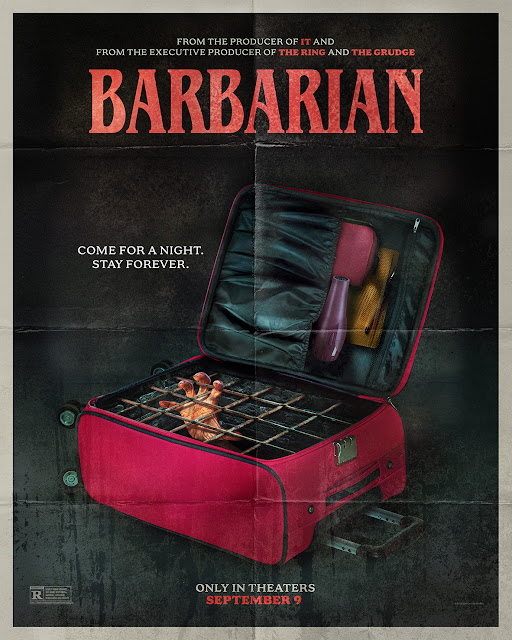 A young woman discovers the rental home she booked is already occupied by a stranger. Against her better judgment, she decides to spend the night but soon discovers there's a lot more to fear than just an unexpected house guest.

Rated R for some strong violence and gore, disturbing material, language throughout and nudity.

Zach Cregger's Barbarian is a devilishly clever, brutal and darkly funny horror film that's sure to leave an impression by the time it ends.  Cregger smartly structures his film using the audience’s preconceived notions to great effect as he plays a game of misdirection, using mood and atmosphere to great effect especially in the film's opening act.  There is a point where the film takes an unexpected turn as it gleefully resets the board and audience’s expectations.  Even as the film moves into stranger and admittedly more ridiculous territory its cast is game for everything the script and director throws at them.  Georgina Campbell is a likable lead who uses common sense early on until the film needs her to lose some IQ points to move the plot along.  Bill Skarsgård plays his character with a solid mix of understated charm and menace which works well for the film.  Barbarian is the type of horror film that works on many levels due to its fastidious level of design and construction which makes it so effective.

Posted by Daniel at 9:11 AM No comments: 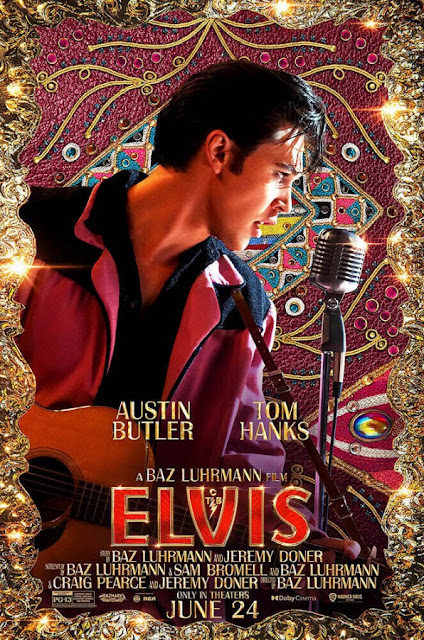 My dear reader(s), this weekend I finally had the opportunity to catch up with Baz Luhrmann's Elvis (2022).

The very stylized life and times of the King of Rock n' Roll.

So...I didn't set out to compare Elvis to my beloved Rocketman, but almost instantly the comparisons started making themselves. I'm reasonably certain the comparison isn't why I wasn't head over heels for Elvis, but...full and fair disclosure and all.

Elvis plays like a fantasy, even though it seems largely true to life. That probably can be chalked up to Luhrmann's flashy style and the King's bigger-than-life persona, but it immediately gives the film a brassy feel that was a bit jarring sometimes.

Austin Butler aces the dramatic scenes and proves an able Elvis impersonator during musical sequences, even if he's missing the spark that makes the King the King. The always reliable Tom Hanks is rightly unsympathetic as Col. Tom Parker to Butler's Elvis. While the story is told from Parker's point of view, he's never painted its hero. Costumes, hair, and makeup are beautifully done, but the story never quite earns its bloated runtime.

Orson Welles once said, "If you want a happy ending, that depends, of course, on where you stop your story." While Rocketman had the benefit of wrapping up its fantastical tale with Sir Elton enjoying personal and professional success, perhaps it was always going to work against Elvis that we know the story doesn't have a happy ending. Perhaps my expectations for the movie were just too high. Or perhaps no telling could have done this magical human justice. Whatever the reason, this movie definitely fell flatter for me than it seemed to for most.

Elvis clocks in at 159 minutes and is rated PG13 for "substance abuse, strong language, suggestive material, and smoking."

While Elvis the movie never quite matches the glory of Elvis the legend, it's an entertaining enough film featuring some great performances and magnificent costumes.

Of a possible nine Weasleys, Elvis gets seven.

Posted by Daniel at 6:51 AM No comments: 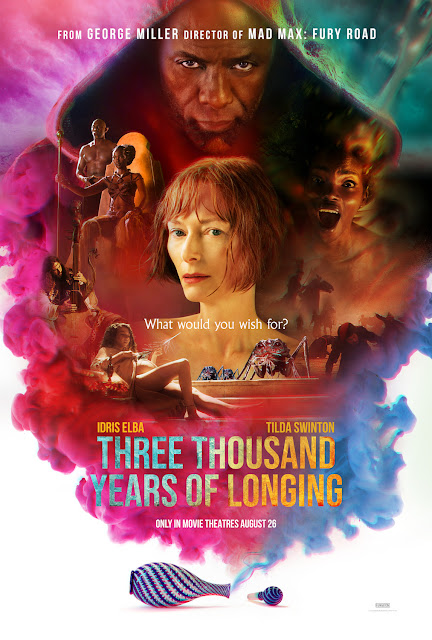 While attending a conference in Istanbul, Dr. Alithea Binnie happens to encounter a djinn who offers her three wishes in exchange for his freedom. This presents two problems: first, she doubts that he's real, and second, because she's a scholar of story and mythology, she knows all the cautionary tales of wishes gone wrong. The djinn pleads his case by telling her fantastical stories of his past. Eventually, she's beguiled and makes a wish that surprises them both.

George Miller's Three Thousand Years of Longing is a lavish and ambitious fable that attempts to show the importance of storytelling.  Miller has lofty goals in mind, something that's fairly apparent early on with it's heady dissection of narratives.  His visual flourishes are wonderfully garish and impactful but the script is really where the meat of the film lies.  Idris Elba and Tilda Swinton carry the film's connective story with some solid chemistry together which makes the film work better than it should.  The collection of stories are a mixed bag with some faring better than others.  It makes for an uneven experience with the film lagging and perking up depending on the tale being told.  Its nature keeps the film from maintaining a consistent energy and flow in spite of committed performances across the board.  As such, the film ends up feeling much longer than it's actual runtime.  Additionally, the primary story between Swinton and Elba doesn't really connect the way it should even though it serves are the film's closer.  Three Thousand Years of Longing sadly never reaches the heights it aspires too ultimately coming off as noble misfire from George Miller.

Posted by Daniel at 2:41 PM No comments: