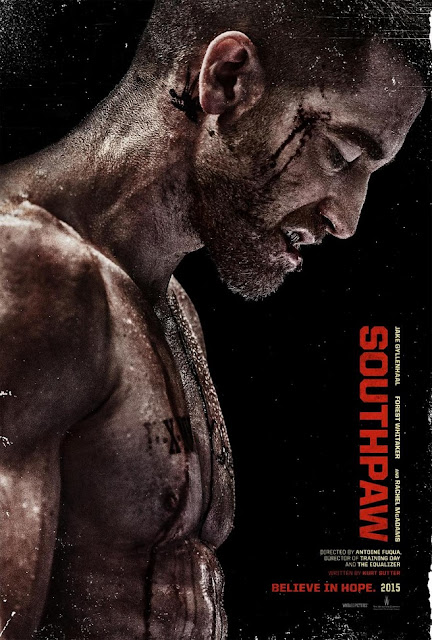 Jake Gyllenhaal stars as troubled boxer Billy Hope in this high-stakes drama from director Antoine Fuqua and Sons of Anarachy creator Kurt Sutter. At the height of his fame and success, Hope is convinced by his loving wife Maureen (Rachel McAdams) to retire from the sport in order to spend more time with the couple's daughter Leila (Oona Laurence). On the night of his retirement announcement, a rival boxer calls out Hope and an altercation breaks out, killing Maureen. Hope's self-destructive behavior worsens, and Leila is taken away by child services. In order to redeem his life and get his daughter back, Hope must return to boxing under the tutelage of hardened trainer Titus "Tick" Willis (Forest Whitaker). ~ Daniel Gelb, Rovi

Rated: R for some Violence and Language Throughout

Southpaw can best be described as reverse Rocky.  Billy Hopes riches to rags to riches never really feels fresh just predictable.  Antoine Fuqua’s film mines better boxing films for material so the films plot feels inevitable instead of engaging.  Thankfully Jake Gyllenhaal delivers an engaging performance that carries the film on multiple levels.  His body is transformed into a believable junior middle weight boxer and the boxing sequences are some of the most realistic ever put on screen.  His intensity is ever present and makes the entire thing watch able.  Forest Whitaker joins the film about halfway through its runtime and it’s all the better for it.  Gyllenhaal and Whitaker make for an interesting pair even as the film rolls towards a predictable finale.  Southpaw isn’t the worse or best boxing film I’ve ever seen but it’s a solid mid range melodrama.