MOVIE REVIEW: THE MITCHELLS VS THE MACHINES 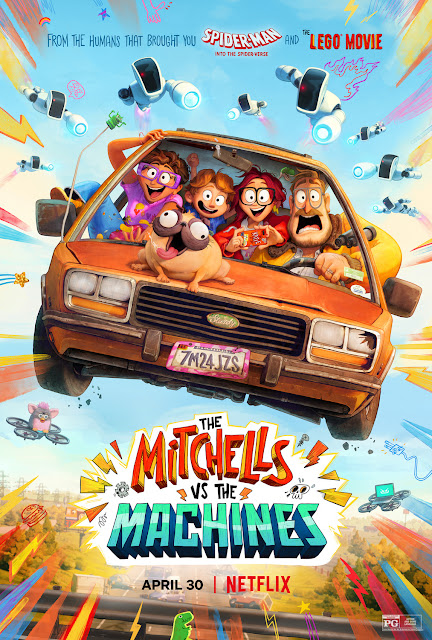 Young Katie Mitchell embarks on a road trip with her proud parents, younger brother and beloved dog to start her first year at film school. But their plans to bond as a family soon get interrupted when the world's electronic devices come to life to stage an uprising. With help from two friendly robots, the Mitchells must now come together to save one another -- and the planet -- from the new technological revolution.

Rated PG for action and some language

The Mitchells vs. The Machines is a light breezy animated family film that has heart to spare.  Michael Rianda’s film has a bright and appealing visual style that’s distinctive enough to separate it from other animated films.  The story is a nice hybrid of a standard family film and a fun sci-fi story.  Neither is particularly groundbreaking but it hits the sweet spot where it finds a meaningful story to tell with engaging characters.  The primary family play off standard tropes but the script is smart enough to give them enough depth to make them engaging and interesting.  The entire thing wouldn’t work if the voice cast didn’t deliver strong performances, thankfully they do in spades.  Danny McBride delivers one of the more restrained performances of his career and it works well for this role.  McBride’s performance is sincere and heartfelt throughout which is a great change of pace for him.  McBride and Abbi Jacobson have believable chemistry as the father daughter duo who are at the heart of the story, as such they are the driving force of the film.  The supporting cast is rounded out with Maya Rudolph, Michael Rianda, Eric Andre and Olivia Colman with each getting their time to shine.  Colman in particular seems to be having a ball as diabolical AI who can’t deal with rejection.  The Mitchells vs. The Machines also delivers a hefty amount of laugh out loud moments that are sure to keep young and old entertained for the better part of its runtime.  There are portions of the film that feel like they could have been trimmed because there really no reason for the film to be nearly 2 hours long, regardless it’s strong family film that works on multiple levels.