MOVIE REVIEW: SPIRAL: FROM THE BOOK OF SAW 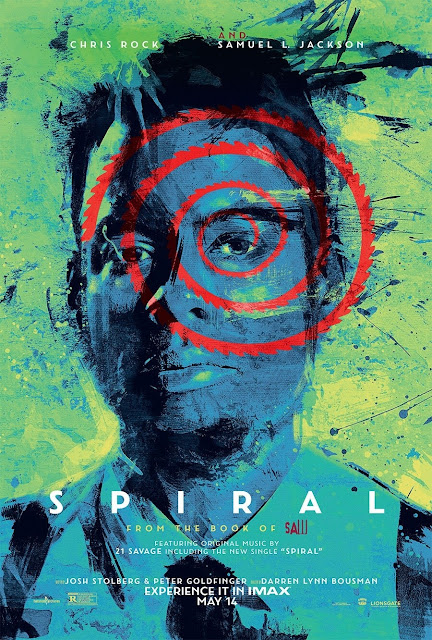 Working in the shadow of his father, Detective Ezekiel "Zeke" Banks and his rookie partner take charge of an investigation into grisly murders that are eerily reminiscent of the city's gruesome past. Unwittingly entrapped in a deepening mystery, Zeke finds himself at the center of the killer's morbid game.

Rated R for sequences of grisly bloody violence and torture, pervasive language, some sexual references and brief drug use

The Saw franchise, now 9 films in with this most recent entry, has always been a low rent Se7en knock off.  It was gorier but the first few films were mildly clever but they fell into more extreme and nonsensical plots something that happens to most horror franchises that are long in the tooth.  Spiral: From The Book of Saw is a soft reboot of the series which explores some interesting concepts but doesn't really explore them, leaving the whole thing feel predictable and half baked.  Darren Lynn Bousman, who is well versed in the Saw universe, returns behind that camera and delivers grungy look that feels like it borrow from Se7en and Predator 2, it's kinetic and sweaty in spurts.  The film's biggest asset is Chris Rock and  Samuel L. Jackson who inject some life into the lackadaisical by screaming most of their lines, early on in the film it almost feels like some of Rock's stand up was ported into the script.  At the very least they both keep the proceedings interesting while you move from one inventive and gruesome trap to another.  The biggest issue is that the central mystery isn't all that difficult to figure out, the film telegraphs it very early on.  As a result, everything feels perfunctory and predictable not to mention that Max Minghella is wasted for the majority of the film.  The films' biggest fault is that the story could have taken a more interesting thematic turn but it never delves into it with any serious effort.  It's a shame that Spiral ends up being another a non descript gorehound sequel instead of the promised reinvigoration of the series.