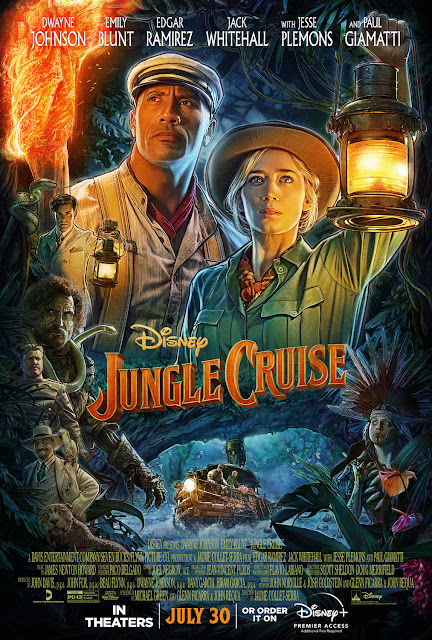 Dr. Lily Houghton enlists the aid of wisecracking skipper Frank Wolff to take her down the Amazon in his ramshackle boat. Together, they search for an ancient tree that holds the power to heal -- a discovery that will change the future of medicine.

Disney's Jungle Cruise desperately wants to harken back to classic adventure romances like The African Queen and Romancing the Stone.  Jaume Collet-Serra's film is a relentlessly aggressive film that moves from one action set piece to another, leaving you with nary a chance to catch your breath.  He and the script are trying to capture the spirt of those films, Johnson and Blunt's outfits are straight out of The African Queen, its execution is closer to a latter day Pirates of the Caribbean sequel.  It's an FX heavy film that's set in an exotic locale but its possible that there isn't a single shot filmed on location, as such its has an artificial feel throughout.  The script doesn't help matters much with a clunky old school feel where you can see every joke and punch line coming a mile away.  The strange thing about the entire production is that it's a fairly enjoyable albeit mindless watch mainly due to it's central stars.  Dwayne Johnson and Emily Blunt make the goofy script work even with some of the sillier conceits, Johnson's Frank loves dad jokes.  Their natural screen magnetism is the film's biggest assets even if they don't share any sort of believable romantic chemistry.  Their character's are broadly drawn with Frank being a charismatic rascal and Blunt's Lily being irrepressibly plucky and headstrong.  Jesse Plemons hams it up as the film's cartoonish villain who is only missing a German pickelhaube to complete his ensemble.  The film does start to wear out it's welcome in its final act showcasing the fact there is no reason this film couldn't be a half hour shorter.  Disney's Jungle Cruise emulates great films but ends up being a fun but hallow imitation.