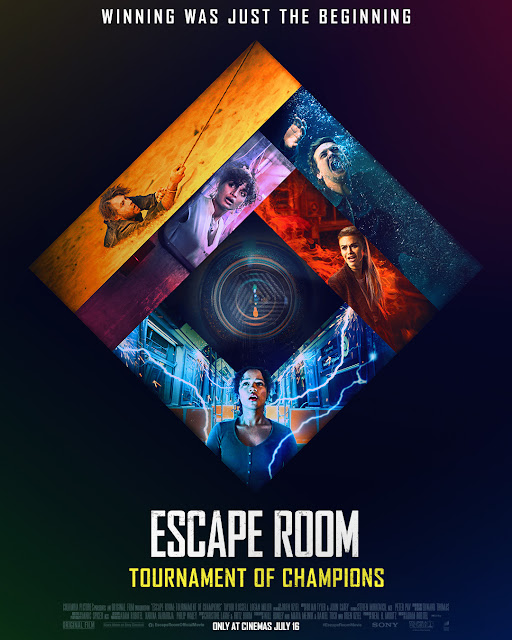 Six people unwittingly find themselves locked in another series of escape rooms, slowly uncovering what they have in common to survive -- and discovering they've all played the game before.

Escape Room: Tournament of Champions is the type of sequel that knows you probably don’t remember much of the original outside of it being enjoyable horror junk food.  It’s smart enough to give you a recap of the original film in its opening sequences before starting in earnest.  Adam Robitel delivers a slickly produced but inherently stupid film that plays it safe by using what worked in the original.  Robitel knows the main attraction to these films are its puzzles and he uses it to film’s advantage allowing you to overlook some shoddy script writing and lackluster acting from the cast.  It’s engaging enough but it still plays like a bastard child of the Saw series and underappreciated Canadian horror film Cube.  The story here is fairly nonsensical with its primary function is to set up the inevitable trilogy capper which will have to answer a slew of unanswered questions.  Escape Room: Tournament of Champions is fine for mindless background entertainment unfortunately it’s the type of film that suffers if you think about it too much.