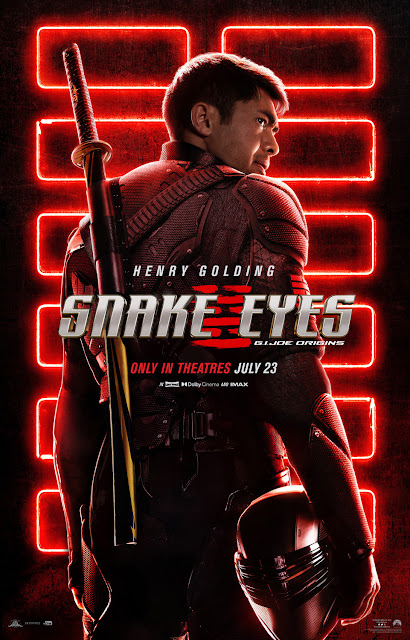 An ancient Japanese clan called the Arashikage welcomes tenacious loner Snake Eyes after he saves the life of their heir apparent. Upon arrival in , the Arashikage teach him the ways of the ninja warrior while also providing him something he's been longing for: a home. However, when secrets from Snake Eyes' past are revealed, his honor and allegiance get tested -- even if that means losing the trust of those closest to him.

Snake Eyes: G.I. Joe Origins is a busy film serving as an origin story and franchise starter.  The fact that its serving multiple masters should be a recipe for disaster but Robert Schwentke’s still manages to deliver some enjoyable ninja action.  Schwentke’s film harkens back to cult 80’s ninja films like American Ninja with a glossy exterior.  The action sequences are well staged with a keen visual outside of some questionable overuse of shaky came.  The choreography of them is top notch and those sequences are the high points of the film.   Henry Golding and Andrew Koji make for an intriguing duo onscreen and their relationship drives the entire film.  Golding possess leading man charisma but you get the sense he could have used a tad bit more depth to make him more interesting than his counter part.  Andrew Koji performance and character is terribly intriguing as he plays him with a silent intensity that always makes him the most interesting character on screen.  Some fun supporting turns from Úrsula Corberó, Samara Weaving & Iko Uwais add some strong female punch to the proceedings with the latter two there to set up the larger G.I. Joe universe.  The film’s biggest issue is its script that doesn’t take advantage of its cast.  Everything plays out in a perfunctory manner while it checks certain boxes since its primary goal was to put pieces in place for future installments.  Snake Eyes: G.I. Joe Origins ends up being forgettable fluff that might have excelled had it possessed some tighter scripting and direction.