MOVIE REVIEW: IN THE EARTH 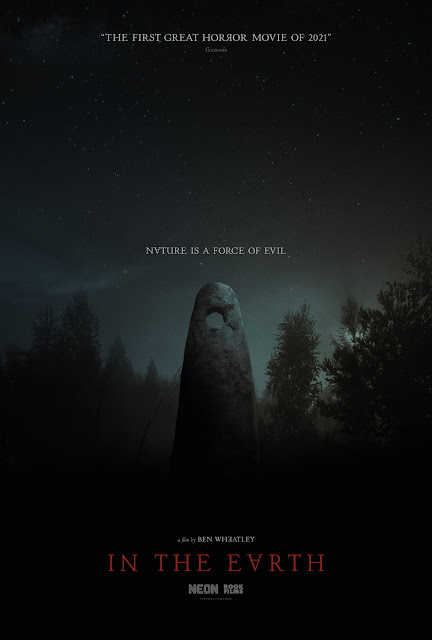 As the world searches for a cure to a devastating virus, a scientist and a park scout venture deep into the woods. As night falls, their journey becomes a terrifying voyage through the heart of darkness as the forest comes to life around them.

Ben Wheatley’s In The Earth can best be described as a earthbound take on 2001: A Space Odyssey crossed with Conrad’s Heart of Darkness.  It’s the type of horror film that aims to make you uncomfortable to the point where some of the more extreme moments start coming off as a funny as the film moves on.  Those adverse to body horror sequences will probably be better off skipping this feature since it makes heavy use of it.  The story itself feels like a hodgepodge of ideas which used pandemic fears as a starting off point then got progressively stranger as it goes on.  That’s not to say that Wheatley, who also wrote the script, doesn’t have something to say but it’s not a coherent whole.  The latter seems to intentional on Wheatley’s part as he assaults the sense on multiple front’s.  The primary duo of Joel Fry and Ellora Torchia aren’t required to do much except react to what is happening to them.  Reece Shearsmith and Hayley Squires do most of the heavy lifting on the creepy factor but the film isn’t ever scary.  Wheately’s In The Earth is type of film that’ll leave you wondering what you just watched the moments the lights go up, it’s bound to elicit divisive reactions.