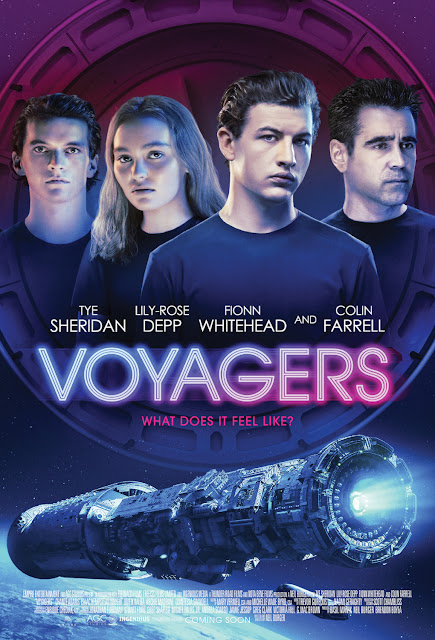 Set in the near future, the film chronicles the odyssey of 30 young men and women who are sent deep into space on a multi-generational mission in search of a new home. The mission descends into madness, as the crew reverts to its most primal state, not knowing if the real threat they face is what's outside the ship or who they're becoming inside it.

Voyagers is a glossy looking film that uses a variety of cinematic inspirations to deliver a paint by the numbers plot with no surprises or innovations.  Neil Burger film, doused in electric blue, has plenty of promise with an interesting set up.  Burger moves his film at a steady pace from the start as we are introduced to Colin Farrell's protector figure and a quick expositional opening which lays out the groundwork for the premise.  Farrell is there simply to set off the plot which leads to him having rather limited screen time.  Once the film gets rolling, plenty of intriguing themes and mysteries are set up but none of them really payoff in a meaningful or thought-provoking way.   Burger, who also wrote the script, doesn't seem interested or capable of delving deeper into any of the fertile thematic elements presented from male aggression, gaslighting, social structures amongst others.  As a result, you are left feeling there is a better story and film in there somewhere had it been handled by somebody else.  What we are left with is a fairly straight forward Lord of the Flies riff that hits nearly all the same beats as the classic book.  The cast is populated by a fairly diverse group of upcoming actors and actresses but Burger manages to use his POC in the worse possible way. Tye Sheridan, whose face is set to forever pout, leads the film along with Lily-Rose Depp with Fionn Whitehead playing the primary villain.  Sheridan & Depp are both rather bland and emotionally distant since neither has the type of screen presence to carry a film.  Whitehead has manic flashes here and there but it's never sustained so the conflict never hits the way it should.  Instead, it all feels perfunctory with a climax that feels like it's ripped from Alien.