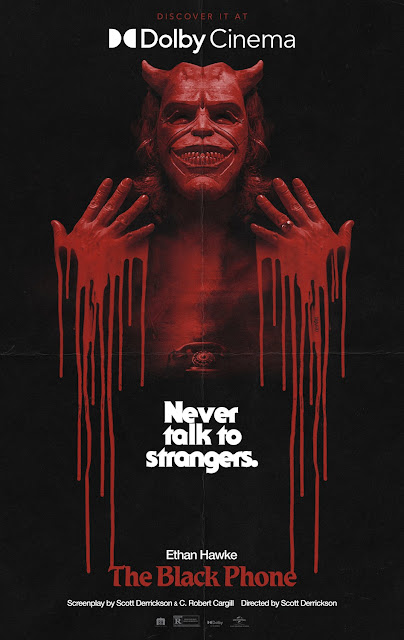 Finney Shaw is a shy but clever 13-year-old boy who's being held in a soundproof basement by a sadistic, masked killer. When a disconnected phone on the wall starts to ring, he soon discovers that he can hear the voices of the murderer's previous victims -- and they are dead set on making sure that what happened to them doesn't happen to Finney.

Rated R for violence, bloody images, language and some drug use

Scott Derrickson's The Black Phone is a solid throwback of a thriller which makes efficient use of it's setting and cast.  Derrickson's film uses it's 70's setting to great effect while avoiding the usual nostalgia overload may productions like to wallow end.  There is a certain authenticity to the way he shoots his film resulting in some striking and memorable visuals.  The story, based on Joe Hill's short story, is simple and fairly straightforward making for lean storytelling which keeps all the action laser focused.  This all wouldn't matter if the younger cast members weren't up for the task.  Thankfully, Mason Thames and Madeleine McGraw are more than up for the task.  Thames has the kind of authenticity and naturalism that's hard to find in most younger actors.  He's able to carry the film ably with relative ease which does wonders for the film.  Madeleine McGraw steals every scene she in and is ultimately the beating heart of the entire film.  Ethan Hawke makes for an intriguing villain by giving him a tangible sense of unpredictability and ferocity.  His character's appearances are unnerving but the film doesn't provide much depth to him making him a cypher.  A more fleshed out character would have made him a more memorable film villain.  As is, The Black Phone is the kind of easily enjoyable thriller that sets out to provide some classic scares in a tight bit of filmmaking.