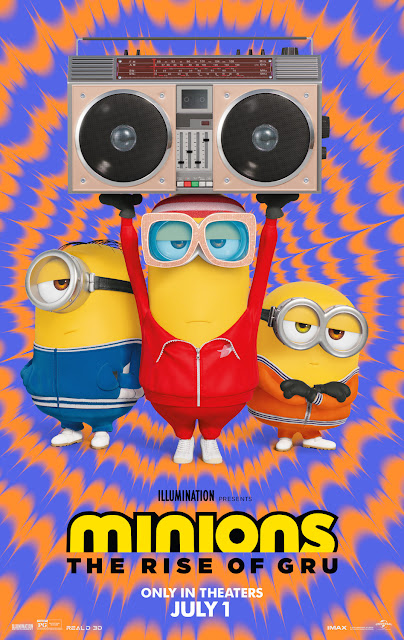 In the 1970s, young Gru tries to join a group of supervillains called the Vicious 6 after they oust their leader -- the legendary fighter Wild Knuckles. When the interview turns disastrous, Gru and his Minions go on the run with the Vicious 6 hot on their tails. Luckily, he finds an unlikely source for guidance -- Wild Knuckles himself -- and soon discovers that even bad guys need a little help from their friends.

Rated PG for some action/violence and rude humor

Your enjoyment of Minions: The Rise of Gru will depend heavily on whether you still find the yellow denim clad underlings adorable or grating.  The target audience is sure to be delighted by the colorful hijinks and adults will appreciate the bevy of 70s references thrown on screen in rapid succession.  Kyle Balda directs the film with energetic ease in this unapologetically light and breeze children's film.  Sure there is a message ingrained through the film's story but none of it is overly heavy or heart wrenching and for this franchise it works.  The three central Minions, voiced again by Pierre Coffin, are the central focus of the film regardless of the film's title and their adventures deliver the biggest laughs.  Their training with Michelle Yeoh's Master Chow is a particularly fun sequence especially since you get the feeling she's really enjoying herself.  Taraji P. Henson's Belle Bottom is set up as the primary villain and she's fun when she's onscreen but the film doesn't take advantage of her or her crew which are voiced by Jean-Claude Van Damme and Dolph Lundgren.  Alan Arkin gets a bit more time to shine as Wild Knuckles who is Gru's idol and ultimately his mentor.  If you are still in business with this franchise by the fifth entry,  Minions: The Rise of Gru will offer an fun easy going family film.