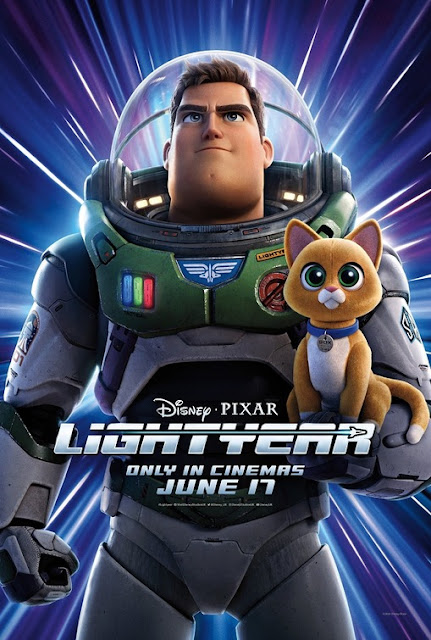 Buzz Lightyear embarks on an intergalactic adventure with a group of ambitious recruits and his robot companion.

If we are being honest there is no good reason for a Lightyear film to exist outside of cashing in on a well known property.  We're told with a quick line of text to open the film that this is the movie that makes Andy want the Buzz action figure in the original Toy Story.  Outside of that bit of crossbreeding, director Angus MacLane goes about delivering a visually impressive sci-fi origin story that pays homage to classic films like Star War, Trek with bits of Aliens and 2001 sprinkled in for good measure.  MacLane keeps the action moving at a steady pace while managing to deliver an emotional montage that echoes the opening sequence from Pixar's Up.  On its surface the script plays like a light fairly straightforward sci-fi adventure at first but it reveals a deeper emotional core as the story moves on even if not as revelatory as some of Pixar's other films.  Chris Evans voice work leads the film even if it takes a minute to get used to him voicing the role.  Evans finds a tenor in his voice that echoes Tim Allen voicework but with enough of that Captain America sound to make it his own. It’s a fun performance played a bit more seriously which fits in with the movie.  The supporting cast of Keke Palmer, Peter Sohn, Taika Waititi, Dale Soules and Uzo Aduba all deliver solid performances even if the characters are slightly underwritten to the point where they don't make the impression they should.  The real standout is Peter Sohn who voices Sox, Buzz's robotic cat assistant, who manages to bring an engaging but fun voice to his character.  Sohn's character gets some of the best comedic moments in the film and will probably be the most memorable of supporting cast.  Lightyear is a crowd-pleasing film that delivers enough fun Toy Story Easter Eggs to keep longtime fans happy and enough action to keep younger kids entertained even if it's not in the top tier of Pixar's catalogue.