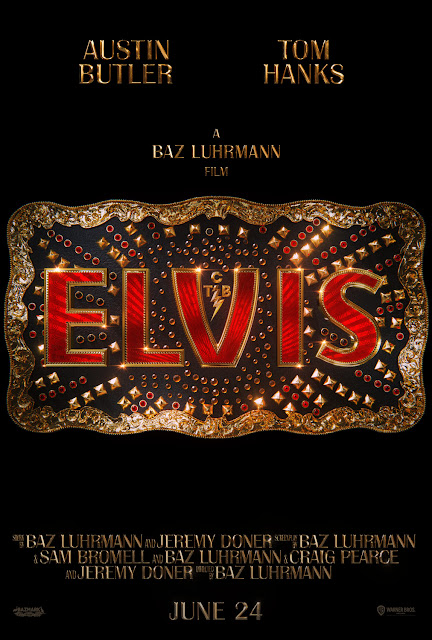 From his rise to fame to his unprecedented superstardom, rock 'n' roll icon Elvis Presley maintains a complicated relationship with his enigmatic manager, Colonel Tom Parker, over the course of 20 years. Central to Presley's journey and happiness is one of the most influential people in his life -- Priscilla.

Baz Luhrmann's Elvis is a frenetic carnival ride of a biopic that shakes up the formula enough to make the genre feel fresh.  Luhrmann's garish style is perfectly suited for Elvis, something that shines through during the film's energetic and meticulously crafted stage sequences.  These moments pulsate with an engaging sense of verve that's hard to resist.  The opening introduction is masterfully played as Luhrmann slowly reveals the fresh faced star in the form of an electric Austin Butler.  Butler simply dissolves into the role, capturing the soulfulness and playfulness of his real life counter part.  Its a fascinating turn for multiple reasons especially since Elvis' persona has been parodied and mimicked excessively by now but he manages to play him with a tangible sense of humanity in the film's quieter moments.  The film uses Colonel Tom Parker deathbed memories as the film’s framing device but it keeps the audience at arm’s length from Elvis’ state of mind especially in his later days which seems like a missed opportunity.  Tom Hanks, under heavy make up, plays Parker like a carnival conman opportunist who latches onto Elvis.  Its a solid performance but you get the sense that Hanks is limited by the prosthetics and cartoonish accent leaving the character as more of a caricature than a fully formed person.  That being said, Hanks and Butler do share some strong sequences together where the script lays bare how the conman kept his grips on the star.  Baz Luhrmann and Jeremy Doner penned the script and its less interested with factual accuracy than it is in capturing those singular moments in his life.  It smartly engages on the issues of musical appropriation never shying away from pointing out where Elvis' inspiration came from.  It would have been easy to gloss over that and focus solely on the spectacle which Luhrmann still does in spades.  There is a sense that Baz cares deeply about his central subject even though he still can't help himself and over indulge in his showmanship, particularly in the final act where attrition starts to dull the effect, but he still manages to deliver a Elvis biopic that will leave plenty of people happy.