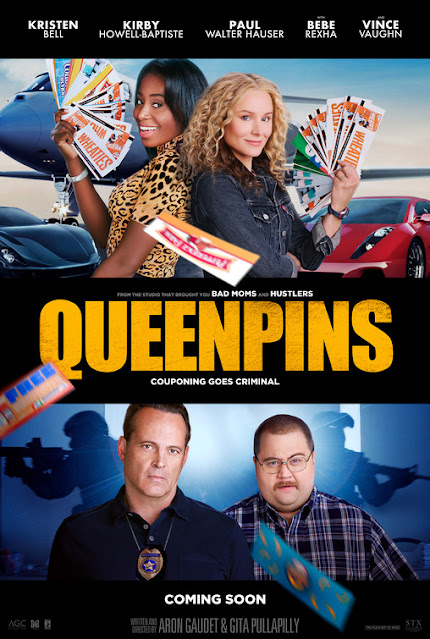 A frustrated suburban housewife and her best friend hatch an illegal coupon-club scheme that scams millions from corporations and delivers deals to legions of fellow coupon clippers. Hot on their trail is an unlikely duo -- a hapless loss-prevention officer and a determined U.S. postal inspector -- both looking to end their criminal enterprise.

Rated R for language throughout

Queenpins is a breezy slice of life crime drama that's smart enough to make great use of it cast.   Writers/directors Gita Pullapilly & Aron Gaudet give these film an easy sensibility that makes its subject matter easy to digest.  At the center of it all is Kristen Bell who has perfected the damaged overachiever.  Bell is right at home in this role that allows her to use her considerable comedic talents with an air of sadness behind her beaming smile.  She and costar Kirby Howell-Baptiste share a natural likeable onscreen chemistry together.  Their character's relationship serves as the lifeblood of the film and ultimately what makes the film so watchable.  Paul Walter Hauser and Vince Vaughn also share a parallel story arcs as investigators on the tail of the two couponing criminals.  The film biggest issue is that film frames the characters as heroes and it mostly absolves them of any real blame or responsibility.  It's a strange bit of framing for what was a real criminal enterprise but based solely on it's cinematic merits,  Queenpins works as fun dramady buoyed by it's game cast.