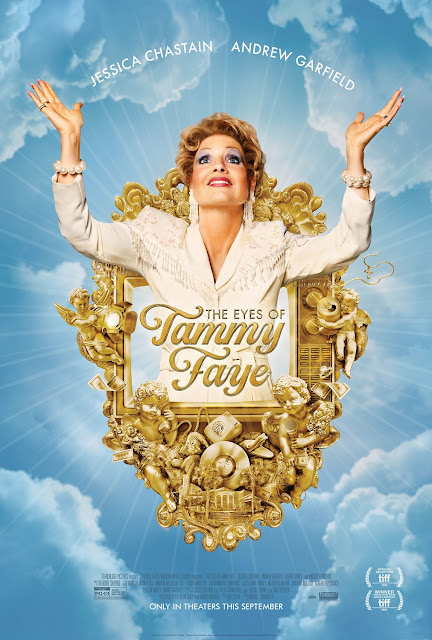 In the 1970s, Tammy Faye Bakker and her husband, Jim, rise from humble beginnings to create the world's largest religious broadcasting network and theme park. Tammy Faye becomes legendary for her indelible eyelashes, her idiosyncratic singing, and her eagerness to embrace people from all walks of life. However, financial improprieties, scheming rivals and a scandal soon threaten to topple their carefully constructed empire.

The Eyes of Tammy Faye, based on a documentary of the same name, is an engrossing biopic that's heavier on style than actual substance.  Michael Showalter's film has a candy colored approach to its primary subjects which is appropriate even if it glosses over some of the grimier realities of their actions.  His film is visually engaging and entertaining throughout especially as everything becomes increasingly garish and outlandish.  The lynchpin of the entire film though is Jessica Chastain who sports chipmunk cheek prosthetics and increasingly layered on make up which leaves her nearly unrecognizable by the end.  Chastain's performance is the type of transformative turn that's ready made for awards season.  She displays an impressive bit of versatility by playing against type with a turn that's heavy on wide eyed naivety and optimism with breakthrough moments of pain underneath it all.  It's difficult to take your eyes off her bombastic turn but Andrew Garfield is just as strong with a slightly more subdued turn. Garfield paints Bakker as a weaselly huckster who's going through his own personal battles while defrauding millions in the process.  A climatic fight lets both actors put their talents on full display.  Cherry Jones and Vincent D'Onofrio turn in solid work in supporting turn which would have been forgettable in lesser actors’ hands.  While the film has plenty going for it you can't help but feel that it's only scratches the surface of these people.  The script takes too broad of an approach to dig deeper in the pair with Tammy being treated with kid's gloves more or less absolved of any blame.  Even with a pedestrian script, The Eyes of Tammy Faye deserves to be seen for its singular performances from Jessica Chastain and Andrew Garfield.