MOVIE REVIEW: IN THE HEIGHTS 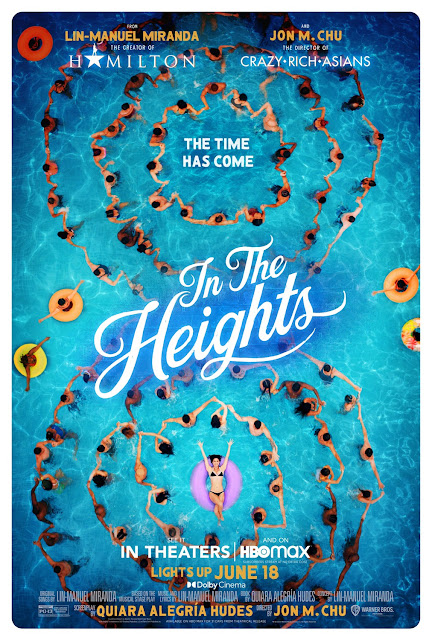 In Washington Heights, N.Y., the scent of warm coffee hangs in the air just outside of the 181st St. subway stop, where a kaleidoscope of dreams rallies a vibrant and tight-knit community. At the intersection of it all is a likable and magnetic bodega owner who hopes, imagines and sings about a better life.

Rated PG-13 for some language and suggestive references

In The Heights is rousing celebration of community heritage and striving for a better life.  Jon M. Chu's film is a vibrant wall to wall musical that's filled with easy to love musical numbers that'll elicit a wide range of emotions throughout its runtime.  The musical numbers written by Lin-Manuel Miranda have an energy to them that feels personal and heartfelt with numbers like 96,000, Paciencia y Fe and Carnaval del Barrio leaving a lasting impact.  Chu's direction takes full advantage of the spectacular choreography during some of the larger ensemble pieces and veers into fantasy in select spots without going full Baz Luhrmann.  The story itself is fairly straightforward but covers a broad array of topics from gentrification, cultural identity and self discovery. This broadness extends to the characters who play more as types than fully realized people.  As such, the characters relationships, especially the main love story, doesn't connect emotionally the way it should.  The impressive part about the film is that it overcomes this shortcoming thanks to it's engaging cast lead by Anthony Ramos who posses a natural performers charisma that shines through the screen.  The supporting cast is made up of an array of Hispanic Broadway actors or singers including Olga Merediz who reprises her role from Miranda's original stage play and shines in spotlight.  The rest of the ensemble are given their chance to shine throughout the film's extensive 2 hour plus run.  Throw in a few moments where you might experience a sensation of déjà vu with the film adaptation of Rent.  That being said, In The Heights feels like more complete adaption of its source material for the big screen.