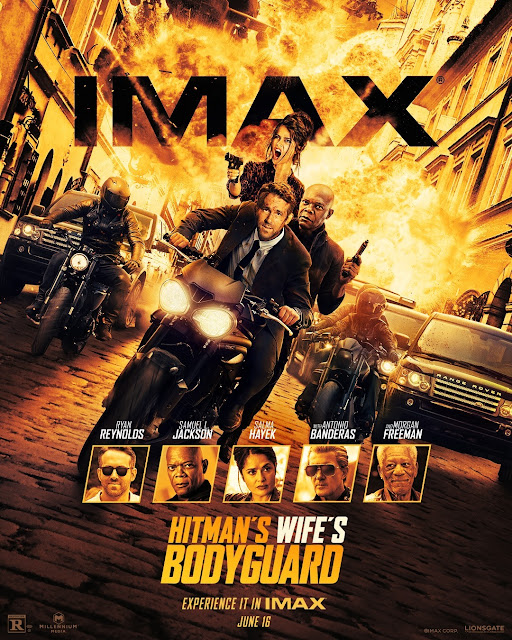 The world's most lethal odd couple -- bodyguard Michael Bryce and hit man Darius Kincaid -- are back for another life-threatening mission. Still unlicensed and under scrutiny, Bryce is forced into action by Darius's even more volatile wife. Soon, all three are in over their heads when a madman's sinister plot threatens to leave Europe in total chaos.

Rated R for strong bloody violence throughout, pervasive language, and some sexual content

The Hitman's Wife's Bodyguard never really breaks any new ground on the genre and it's script feels hackneyed and lazy but its still manages to provide some good mindless R rated fun.  Patrick Hughes directs his film with a made for standard cable feel to it even with the A list talent.  The action is fast and energetic set in attractive European locales but it all feels disposable like they could have been lifted from a dozen other films.  Thankfully, he's edited this film down to a lean hour and half so it's kinetic energy doesn't become exhausting like the first film.  Ultimately what save this film is the what made the first film work the chemistry of the cast.  Ryan Reynolds and Samuel L. Jackson are once again set to ten for the duration of the film as curse words and bullets fly.  Salma Hayek gets a much larger role here and it's to the film's benefit since she can play just as rough and loose as her two counter parts.  Antonio Banderas is just as a fun sporting a fabulous blonde wig while doing his best mock James Bond Villain.  It's all decidedly goofy and silly but you get the feeling the cast knows exactly what kind of film they are making, Frank Grillo's over the top Boston accent should be a dead giveaway, and they have fun with it.  The Hitman's Wife's Bodyguard isn't going to be topping a lot of people top ten films of the year but it's goofy enough for an enjoyable bit of mindless fun.