MOVIE REVIEW: THE CONJURING: THE DEVIL MADE ME DO IT 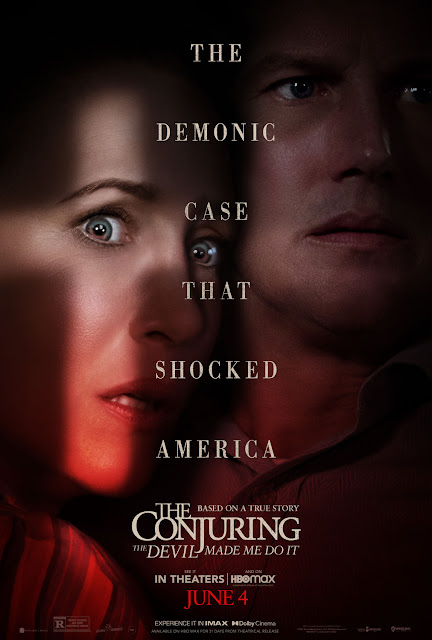 Paranormal investigators Ed and Lorraine Warren take on one of the most sensational cases of their careers after a cop stumbles upon a dazed and bloodied young man walking down the road. Accused of murder, the suspect claims demonic possession as his defense, forcing the into a supernatural inquiry unlike anything they've ever seen before.

Rated R for terror, violence and some disturbing images.

The Conjuring: The Devil Made Me Do It is an effective if less impactful entry in the main series.  Michael Chaves does his best James Wan impression by delivering a film that has a 80s horror feel to it with an opening sequence that pay homage to a horror stalwart.  Unfortunately, it doesn’t maintain that level of intensity throughout its runtime.  There are plenty of strong set ups and jump scares but the story doesn’t ever really find its footing in a meaningful way.  As such the story never produces that sensation of dread or foreboding that top tier religious horror films elicit.  It’s still incredibly watchable due to strong work form Patrick Wilson and Vera Farmiga.  By this point in the series both actors inhabit the skin of their characters with a palpable level of authenticity.  Outside of the scares, this series has primarily been about this couples marriage and love story.  It’s the beating heart of the story and the main reason these films work even in lesser entries like this.  The biggest issue here is that a lot of the story and tropes have all been done in better films.  It doesn’t really break any new ground and doesn’t explore a tantalizing story thread with John Noble’s character with it choosing for a more straightforward approach.  This third entry in The Conjuring franchise works but most hardcore horror fans will be left wanting for more.