MOVIE REVIEW: THE TRAGEDY OF MACBETH 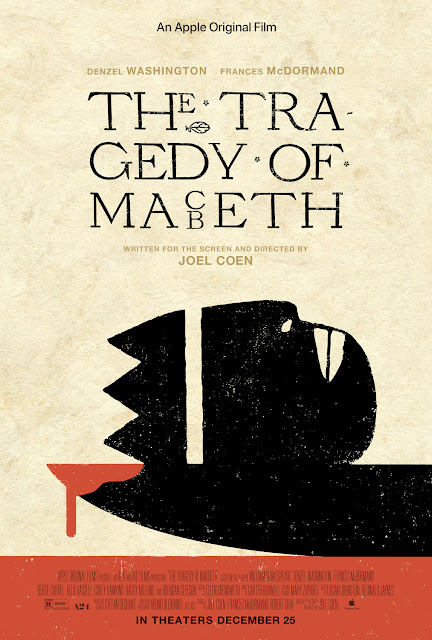 A Scottish lord becomes convinced by a trio of witches that he will become the next King of Scotland. His ambitious wife will do anything to support him in his plans of seizing power.

Joel Coen's The Tragedy of Macbeth is a fascinating amalgam of stage minimalism and cinematic grandeur.  The resulting concoction echo's Ingmar Bergman's The Seventh Seal and Akira Kurosawa's Throne of Blood itself an adaption of Macbeth.  It's visually arresting and engaging from it's opening frame.  Stage actress Kathryn Hunter eerie turn as the witches gives the film an air of urgency and kinetic energy and she contorts unnaturally in her introduction.  The familiar but dense Shakespearean dialogue is performed with emotional precision from it's stellar cast.  Denzel Washington's older Macbeth hits all the right notes especially as the film progresses and his character's mental state declines into madness.  Frances McDormand is just as strong as his calculating Lady Macbeth.  They both deliver lines in such a naturalistic fashion that it's easy to get lost in their individual performances, when the pair share a scene their energy burns through the screen.  Supporting turns from Alex Hassell as Ross and Corey Hawkins as Macduff leave the biggest impact outside of the central duo.  The Tragedy of Macbeth is a visually striking, narratively efficient adaptation that's sure to leave an impression for years to come.