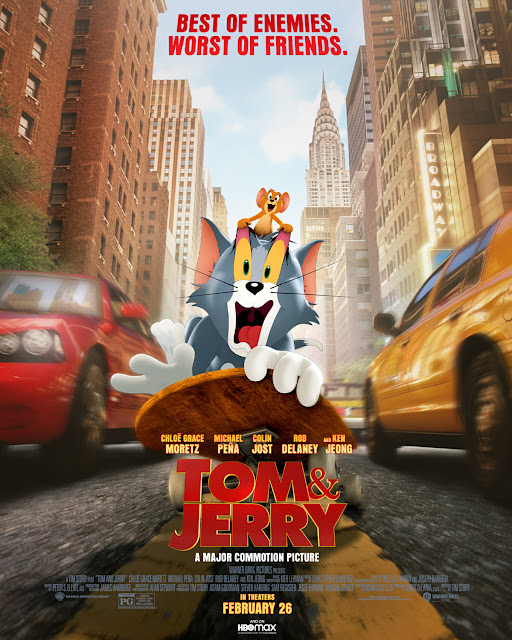 A legendary rivalry reemerges when Jerry moves into 's finest hotel on the eve of the wedding of the century, forcing the desperate event planner to hire Tom to get rid of him. As mayhem ensues, the escalating cat-and-mouse battle soon threatens to destroy her career, the wedding, and possibly the hotel itself.

Tom and Jerry is very much a throwback on multiple levels.  The titular pair are some of the most iconic characters in the history of animation with this being the second outing on the big screen.  It’s not the mess that the 1992 film but still scattershot and uneven for its runtime.  The live action hybrid works fairly well even though there are multiple times that you can tell the cast is reacting to air or placeholders.  Its still a very impressive feat on a technical level and the animations looks wonderfully fluid.  It’s hard to watch this without getting some Who Framed Roger Rabbit vibes in spots with a more family friendly approach.  The story and direction are harmlessly broad for the most part but there are bits of edge, some of which works well while others fall flat.  Tom and Jerry mostly stay true to their classic iterations which is a win for people who remember the classic shorts.  The human cast is solid if bland with Chloë Grace Moretz carrying the larger portion of the film, Moretz is a talented actress but her delivery here feels a little wooden and uninspired.  Her character never really connects as a fully formed entity but just a vessel to move the story along.  Michael Peña likewise doesn’t feel as naturalistic as he usually does which leads me to be believe that there might be a disconnect between the live actors and their animated counter parts.  As such, we are left with an overlong film that works in spots but lulls in others.  Tim Story’s film would have benefited from trimming but overall it’s a solid mindless family film that’ll keep most kids entertained.