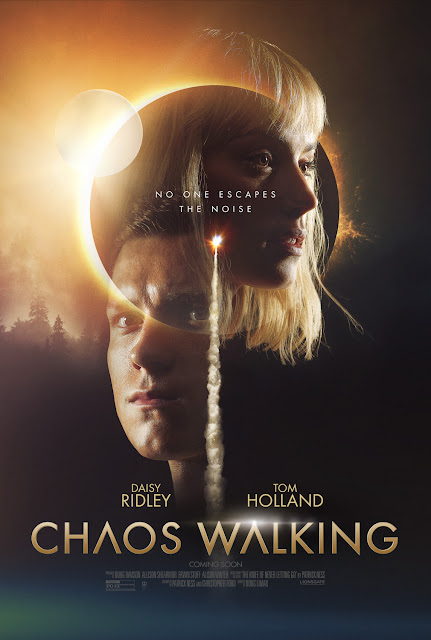 In Prentisstown, Todd has been brought up to believe that the Spackle released a germ that killed all the women and unleashed Noise on the remaining men. After discovering a patch of silence out in the swamp, his surrogate parents immediately tell him that he has to run, leaving him with only a map of New World, a message, and many unanswered questions. He soon discovers the source of the silence: a girl, named Viola.

Rated PG-13 for violence and language

Chaos Walking is a prime example of an enjoyable film that still feels like a missed opportunity.  Doug Liman's troubled production, originally filmed in 2017 and pushed back multiple times, is a visually appealing hybrid of a couple of genres.  There's the standard dystopian base mixed with a western, paired with some lovely pacific northwestern vistas which gives the film a distinctive look.  Linman tries his best to keep you from noticing the clichés that make up the skeleton of the plot while using some impressive effects to visualizes the film's primary conceit, the noise.  The "thoughts" are visualized as personalized auras or projections occasionally which keeps the proceedings from lagging even in slower moments.  The cast does the best they can with the script which seems interested in larger themes like sexual politics and zealotry but never delves into any of them with any serious depth.  Daisy Ridley's female character is the kicking off point of the entire story but her character feels painfully underwritten, as such she's relegating to reacting to situations and not much else.  Tom Holland's character fares better mainly due to his general boyish likeability which works so well for as Spiderman.  Holland's interactions with Ridley are the lifeblood of the film and makes markedly more watchable than it deserves to be.  Sadly, there is a bevy of a excellent actors who are short changed by the script.  Mads Mikkelsen can play passive aggressive villainy in his sleep but the film doesn't really give him much to do outside of looking at people menacingly.  Faring even worse are Demián Bichir, Cynthia Erivo, & David Oyelowo whose character seem much more nuanced and interesting than the script allows them to be.  Ultimately, Chaos Walking is a forgettable miss that could have been so much more.