Cindy Prascik's Review of The Contractor & The Gray Man 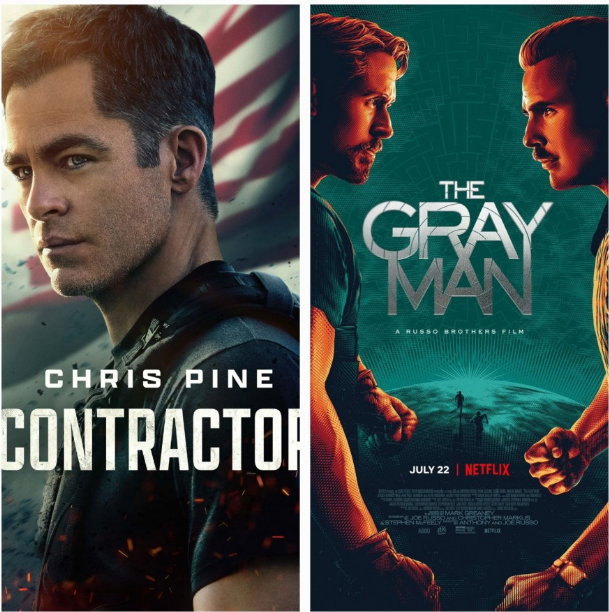 Say, there, dear reader(s), did'ja miss me? Probably not, but I'm back with a couple reviews for your eager-ish eyes.

Spoiler level here will be mild, nothing you wouldn't know from the trailers or the IMDB synopses.

A Special Forces sergeant, involuntarily discharged from the service, finds work (and trouble) with a private contractor.

The Contractor has been bouncing around the buy/rent streaming circuit for several months. I wasn't interested enough to pony up any cash, but, when it turned up for free, the time was right.

The Contractor lays its groundwork slowly. The first half-hour really feels like it's going nowhere, and there's nothing so complicated that the movie couldn't have cut to the chase in half the time. Chris Pine (my favorite of the Hollywood Chrises!) portrays James, a brooding hero trying to stay afloat in a post-military life that owes him better than he gets. Ben Foster steals the show (as Ben Foster always does) as a fellow ex-soldier who gets James into the contract business. Kiefer Sutherland, Gillian Jacobs, JD Pardo, and Eddie Marsan flesh out cookie-cutter supporting roles that could have been handed to lesser names and been none the worse for it. The story twists and turns rather nicely, if somewhat predictably, but seems to rush to its end. Cutting 15 minutes from the setup and devoting it to the payout would have served the picture well, but ultimately it maintains tension and ties up its story nicely enough that we'll call it a win.

The Contractor clocks in at 103 minutes and is rated R for "violence and language."

The Contractor is a generic but serviceable way to pass a late summer afternoon. Of a possible nine Weasleys, the Contractor gets four and a half.

The Contractor is now playing/streaming on the Showtime family of networks, and is available to rent or buy from all the usual outlets.

Next on my Saturday schedule was the Gray Man.

After discovering some of the agency hierarchy's dirty secrets, a CIA dark operative finds himself on the run from a psychotic former colleague.

The Gray Man is another by-the-numbers thriller salvaged by a reasonably talented, good-looking, and likeable cast. Ryan Gosling and Chris Evans face off in the leads, with Evans' performance reminding me of nothing more than Jason Patrick's turn in my personal favorite Chris Evans movie, the Losers. The entertaining pair, along with some unique action sequences, combine for a good enough time, but the movie's attempts at humor are painful, and it overstays its welcome by a solid 30 minutes.

The Gray Man runs 122 minutes and is rated PG13 for "intense sequences of strong violence, and strong language."

The Gray Man is a passable thriller elevated by a solid cast. Of a possible nine Weasleys, the Gray Man gets five.

The Gray Man is now streaming on Netflix.