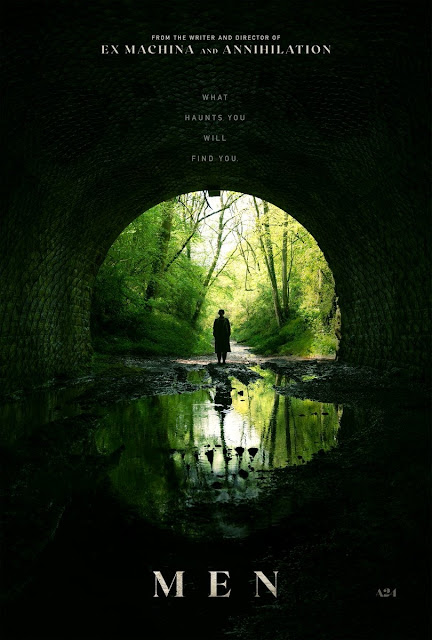 In the aftermath of a personal tragedy, Harper retreats alone to the beautiful English countryside, hoping to find a place to heal. However, someone or something from the surrounding woods appears to be stalking her. What begins as simmering dread soon becomes a fully formed nightmare, inhabited by her darkest memories and fears.

Alex Garland's third film, Men, is a stylish fever dream that takes broad strokes at it central theme.  The film establishes an unsettling atmosphere immediately juxtaposed with the lush beauty of the English countryside.  Flashbacks establish the central character's state of mind while dealing with increasingly nightmarish situation.  Each scene is a meticulously constructed and packed with subtle and overt thematic overtones as the tension increases as the film moves on.  Jessie Buckley carries the film with ease as the central woman in a vortex of menacing masculinity.  The script doesn't ask much from Buckley outside of being confused and terrified but she adds layers to the character that isn't on the page.  Its a fascinating performance that puts you in the character's skin and makes you feel every bit of terror as the film becomes increasingly disturbing and abstract.  Veteran British actor, Rory Kinnear is tasked with playing nearly every other character onscreen.  It's a dauting, disjointing task but Kinnear's talents are up to the task with each character feeling like a singular representation of masculinity.  Garland clearly has something to say and for the most part he accomplishes it even if the actual story is decidedly simplistic while he take big swing at bigger idea instead of character depth.