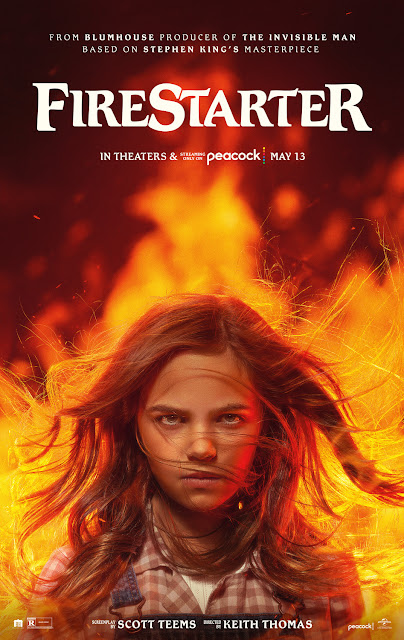 A couple desperately try to hide their daughter, Charlie, from a shadowy federal agency that wants to harness her unprecedented gift for turning fire into a weapon of mass destruction. Her father taught her how to defuse her power, but as Charlie turns 11, the fire becomes harder and harder to control. When a mysterious operative finally finds the family, he tries to seize Charlie once and for all -- but she has other plans.

Firestarter is the kind of remake that never makes it clear why it exist or is even necessary.  Keith Thomas directs the film with a blasé inertness that drains the entire proceedings of any sort of engaging energy or drama much less anything that resembles actual horror.  There's nary a trace of tension or visceral excitement for the film's mercifully short runtime as the cast goes through the motions with a uninspired script that's as generic as they come.  Zac Efron seems disinterested from the moment he shows up on screen, as if he'd be anywhere else but there.  Ryan Kiera Armstrong tries her best to exude a unnatural menace in her role as the titular Firestarter only occasionally succeeding.  Michael Greyeyes and Gloria Reuben play the primary villains with neither coming off as scary or threatening due to a silly script that doesn't give them anything to work with.  The lone bright spot in the entire affair is the film's distinctive score which was done by horror legend John Carpenter.  The score makes you think of far better 80s films and leaves you wishing Carpenter had come out of retirement and just directed this remake himself.