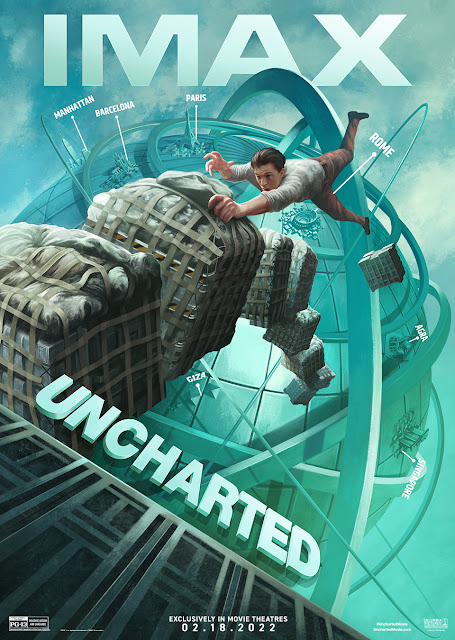 Nathan Drake and his wisecracking partner Victor "Sully" Sullivan embark on a dangerous quest to find the greatest treasure never found while also tracking clues that may lead to Nate's long-lost brother.

Rated PG-13 for violence/action and language

The Uncharted video game franchise is known for it's cinematic style and plotting so its rather baffling to see the live action take hit the big screen in such a bland vehicle.  I will say that I only have a passing familiarity with the game series but it does seem like a perfect franchise to make the jump to the big screen successfully.  Sadly, the film that ends up on screen feels like a copy of a copy as it delivers retreads of better action adventure films but never delivering anything new or exciting.  Ruben Fleisher's film feels like it's been through multiple focus groups resulting in the most generic action and characters.  The script doesn't help much since it's content with following the path of least resistance leaving very little mystery since you can see every turn coming.  Tom Holland and Mark Wahlberg do the best they can with the material but neither can be accused of elevating any of it.  Their central relationship never really works the way it should even though some of the interactions are fun.  Sophia Ali and Tati Gabrielle do more with limited screen time but both of their characters are woefully underdeveloped.  Antonio Banderas is criminally underused as the film's main villain even though he seems game to ham it up.  Uncharted isn't the worst video game adaptation out there but it could have been much better and more memorable.