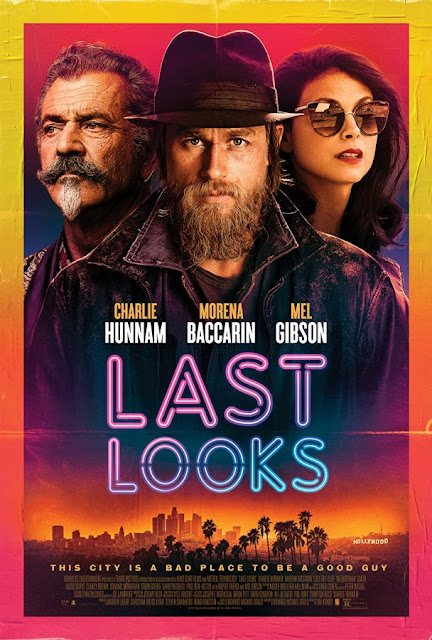 Spoiler level here will be mild, presumably nothing you wouldn't know from a trailer if you saw one, which I didn't.

An ex-LAPD detective is called to investigate when a drunken actor is accused of murdering his wife.

Last Looks is a solid mystery that still feels like it might have gone straight to video even pre-Covid. While Charlie earns top billing, the biggest name in the cast is definitely Mel Gibson. Putting aside the baggage that now carries, Gibson is teriffic and manages to garner sympathy for a character who is pretty unsympathetic. Practice makes perfect, I guess. For Hunnam, this is a great role and he's great in it. A Charlie Connoisseur, I've endured some lemons on his behalf, so this was a very happy surprise. The rest of the cast is as good as it needs to be, if unspectacular. The story takes some interesting turns, and maintains a dry sense of humor that keeps it from being too grim. It wouldn't surprise me one bit if a streaming service decided to spin this off into a series; both cast and characters seem ideally suited.

Last Looks clocks in at 110 minutes and is rated R for pervasive language.

Last Looks spins an enjoyable yarn, with some laughs thrown in for good measure. Of a possible nine Weasleys, Last Looks gets seven.

Last Looks is now available to rent or buy on Amazon or your cable/dish provider.