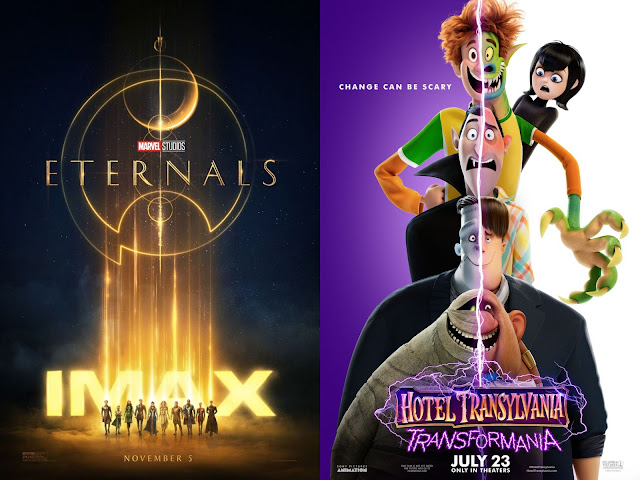 My dear reader(s): This weekend I was able to catch up with a couple titles I'd very much been looking forward to, Marvel's Eternals and Hotel Transylvania: Transformania.

Spoiler level here will be mild, just a small, non-plot-specific comment on HT4.

D-List Marvel heroes attempt to save the world whilst navigating their own personal soap operas.

'Kayyyyyyy...first I want to say I didn't hate Eternals as much as many seemed to, and I didn't think it was any worse than most Marvel content. There were a few specific things I liked, and more that I didn't like, and for whatever that is worth to you, my dear reader(s), here they are.

An interesting and diverse cast. Perhaps the most diverse of any costumed hero flick to date. We love to see it.

(Spoiler) turning up in the mid-credits scene. If you're online at all, ever, you probably know, but I won't divulge it here. Suffice to say I squealed even though I knew it was coming.

A couple truly unexpected (at least by me) developments. Mostly Eternals doesn't reinvent the wheel, but there were a few times I thought, whoa, did not see *that* coming!

The potential for some of these characters to get very interesting, assumimg they get some space in a less-crowded future film. The possibility is there. We'll see what they do with it.

Eternals is too long, easily by 30 minutes, maybe more. Way too much filler. BUT...

...it also fails to explain most characters fully enough for non-comic readers. No one here is Captain America; the casual viewer could do with an abridged history and explanation of powers for these folks.

Most of the dialogue is awkwardly written and badly delivered, and the story is messy and borrows too much from other genre pictures.

Some of the effects are inexpicably sketchy for such a big-budget effort, and, finally...

Marvel's Eternals clocks in at 156 minutes and is rated PG13 for "fantasy violence and action, some language, and brief sexuality."

Eternals is another forgettable bit of fun from Marvel, but it suffers for its bloated runtime, lack of familiar heroes, and failure to flesh out new faces. Of a possible nine Weasleys, Marvel's Eternals gets four and a half.

Next on my weekend agenda: Hotel Transylvania: Transformania.

The fourth installment in the Hotel Transylvania series caused me to utter perhaps the strangest words that have ever come out of my mouth: "I hope this is still good without Adam Sandler!" Drac here is voiced by one Brian Hull. I'm not a fan of Sandler and I'm not 100% sure I'd have noticed the difference if I hadn't known beforehand, but - armed with the knowledge - something definitely felt off with the new Drac. That being said, the HT movies are among my favorites, and I enjoyed this installment quite a bit.

Many faves from the previous films have returned here: Steve Buscemi, Keegan-Michael Key, David Spade, Molly Shannon, Selena Gomez, and Andy Samberg, to name a few. What initially seemed like a limited spooky premise has been parlayed into movies that tell pretty different stories. This one is good fun with a nice message about valuing people for who they are, not who you want them to be. The animation is cute and colorful, if nothing groundbreaking. Transformania plays like a finale, and if it is, it's a good one. If they choose to make more, well...I'll be first in line, despite the fact that this Drac (spoiler alert) really doesn't say, "Blah blah blah." Not even once. *sadface*

Hotel Transylvania: Transformania runs 98 minutes and is rated PG for "some action and rude humor, including cartoon nudity." (Seriously, I didn't make that up.) 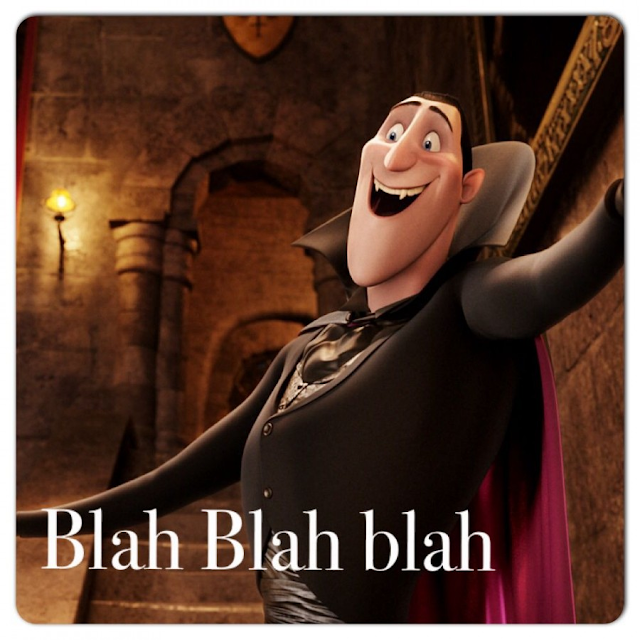