Cindy Prascik's Review of The Dirt 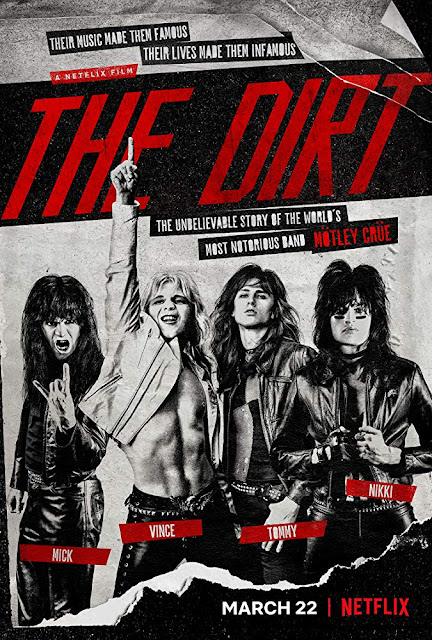 For the second week running, Netflix made me a better offer than the cinema, so, thanks to that and the flu, I spent yesterday morning in bed with the Motley Crue biopic The Dirt.
A little note about spoilers: I generally try to stay reasonably spoiler-free; however, I won't hesitate to reference actual events of decades past. If you are unfamiliar with Motley Crue and don't want to know the story until you've watched this movie, please refrain from reading until you've done so.
The Dirt and the book on which it is based are Motley Crue as seen by Motley Crue. Told from the first-person point of view of each band member in turn, the movie breaks the fourth wall and even gives wink-wink acknowledgements of liberties taken with the truth, but it never really rises above four men whose psychological development stopped about the age of 16 trying to show the world how badass they are. That being said, if you have the stomach for people behaving in the most vulgar ways you can imagine...well...it makes for some damn funny stories. When the movie is self-aware enough to recognize its own ridiculousness, it's a lot of fun, backed by some great Crue tunes; however, bad acting and worse wigs make the tale's low points a rougher go, with neither the script nor performers having the skill to handle them. The movie depicts the car accident that claimed the life of Hanoi Rocks drummer Nicholas "Razzle" Dingley and the death of Vince Neil's daughter Skylar in too much visual detail; in more deft hands the emotional impact could have been felt minus images of a cold, grey child in a hospital bed or the film's most jovial character expiring in a mangled sports car. John Corabi, a talented artist who made some decent music with Motley Crue in Neil's absence, unfairly gets the Yoko treatment here, but my dear Razzle is portrayed just as I remember him: fun, lovable, and perhaps a little too easily entertained. An afterthought about "regrets" in the closing voiceover feels like a bit of an apology to anyone the band may have hurt over the years, either directly or by extension. Ultimately, The Dirt plays as the story of four "brothers," who, despite epic highs and crushing lows, remained by one another's sides until the band finally called it a day on New Year's Eve, 2015. (Note: The Crue did record four new songs for this movie.)
The Dirt clocks in at 107 minutes and is rated TVMA for language, nudity and sexual situations, cigarette and drug use, and some violence.
The Dirt is an objectively bad film on almost every level; however, if you're a Motley Crue fan and/or you're nostalgic for the time period of the band's heyday, you're likely to enjoy it anyway.
I tick both of those boxes, and I'd watch it again. Of a possible nine Weasleys, The Dirt gets five.
Fangirl points: The Dirt's end credits include clips from Motley Crue's mid-80s home video, which I watched until it wouldn't play anymore.
"Hi, we're Christmas!" Also, forgive the poor quality, but this is the only image I ever wanted for this review!