MOVIE REVIEW: EVERYTHING EVERYWHERE ALL AT ONCE 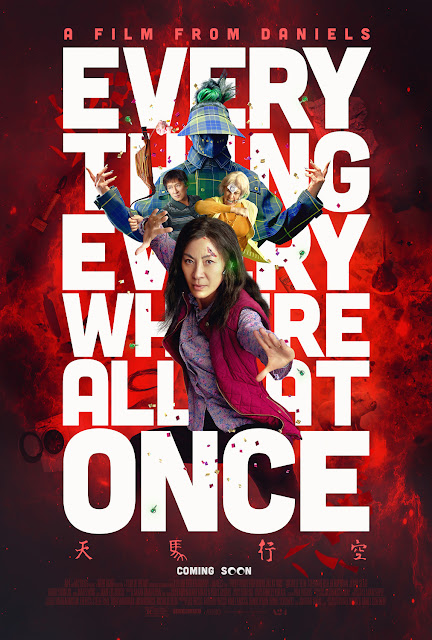 When an interdimensional rupture unravels reality, an unlikely hero must channel her newfound powers to fight bizarre and bewildering dangers from the multiverse as the fate of the world hangs in the balance.

Rated R for some violence, sexual material and language

Everything Everywhere All At Once is a wildly imaginative bonkers film that will leave you looking at hotdogs and everything bagels in a new way.  Daniel Kwan and Daniel Scheinert direct the film with a freewheeling kind of energy that's infectious and captivating because of the sheer audacity of the entire thing.  This is the type of film that has no problem throwing everything at the audience but the biggest bit of cinematic alchemy is the amount of heart at the center of it all.  A hefty amount of credit for that goes to Michelle Yeoh who anchors the film with a performance that runs the gamut of emotions.  She's entirely committed to the role and rolls with everything her character goes through with incredible ease, displaying the kind of singular talent she is.  She is the beating heart of the film aided by some strong supporting turns from Ke Huy Quan, Stephanie Hsu, James Hong and Jamie Lee Curtis who is clearly having a ball.  They share incredibly strong chemistry together which makes the insanity on screen easier to digest.  If there is a small complaint, the film is unfettered on every level and probably could have benefited from some trims here and there to make it a more effective film.  Still, Everything Everywhere All At Once stands as a beacon of originality in a sea of diluted ideas.