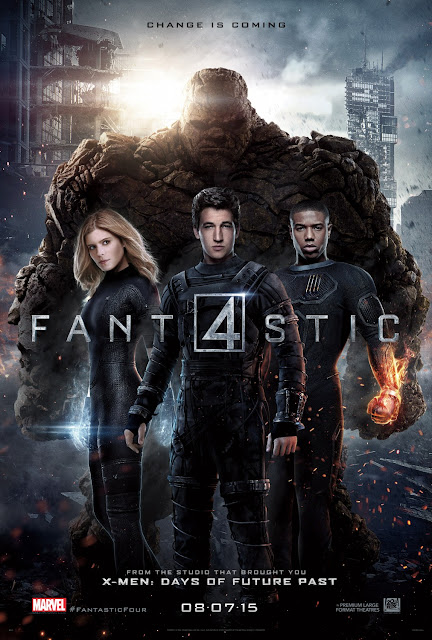 Brilliant scientist Reed Richards builds a device that allows users to teleport to an alternate dimension, but an experiment involving it goes wrong and leaves him and his three teammates with unusual superpowers. The quartet are then forced to work together to battle an enemy from their past. This reboot of the iconic Marvel superhero team stars Miles Teller as Richards (who becomes Mr. Fantastic, able to bend and stretch his body into impossible shapes), Michael B. Jordan as Johnny Storm (aka the Human Torch, whose body can erupt in flames), Kate Mara as Sue Storm (aka the Invisible Woman -- no explanation needed), and Jamie Bell as Ben Grimm (who is transformed into the rock monster known as The Thing). Directed by Josh Trank. ~ Jack Rodgers, Rovi

There were two famously troubled productions hitting the screen this summer.  Antman ended up surprising mostly everyone including myself but the reboot of Fantastic Four fails in every way that film succeeded.  A morose joyless experience from start to finish, Josh Trank’s film hits all the typical origin story beats but never brings anything new to the table.  It’s ultimately a plodding mess of a film that never coalesces into anything nearing fun or entertaining.  It’s a shame because there’s a capable cast of actors on hand.  Unfortunately, they don’t share a shred of chemistry together.  Each of them delivers their lines with a robotic sense of inevitably and disinterest.  Perhaps if the script wasn’t a hackneyed retread of things we’ve all seen before they’d be more interested in their performances.  At a little over an hour and half, the film drags on to it’s inevitable conclusion which doesn’t deliver much satisfaction either since the villain is about as silly looking as they come.  Your mind might start to wander, even making wonder if those original FF4 films were really that bad right before you remember that The Incredibles is still the best FF4 film around.