MOVIE REVIEW: INSIDE OUT 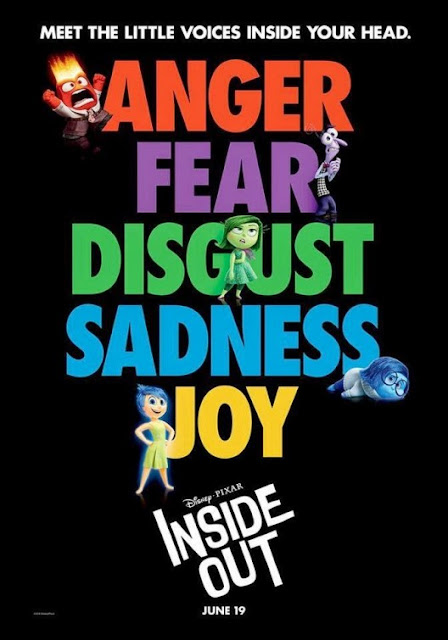 Emotions run wild in the mind of a little girl who is uprooted from her peaceful life in the Midwest and forced to move to San Francisco in this Pixar adventure from director Pete Docter (Up, Monsters Inc.). Young Riley was perfectly content with her life when her father landed a new job in San Francisco, and the family moved across the country. Now, as Riley prepares to navigate a new city and attend a new school, her emotional headquarters becomes a hot bed of activity. As Joy (voice of Amy Poehler) attempts to keep Riley feeling happy and positive about the move, other emotions like Fear (voice of Bill Hader), Anger (voice of Lewis Black), Disgust (voice of Mindy Kaling) and Sadness (Phyllis Smith) make the transition a bit more complicated. ~ Jason Buchanan, Rovi

Inside Out is a great Pixar film that’s thematically dense and impressive on multiple counts.  It works wonderfully as a kid’s film but I can’t help but think that small kids who see this now will view it differently as they grow older.  That’s what makes this film so special.  There’s something universally relatable about the story being told.  Peter Docter directs his film with a breezy sort of feel while keeping his audiences thoroughly engaged in all the characters.  The animation designs are wonderfully realized with a sort of retro feel to them.  The voice cast is excellent all around with Amy Poehler and Phyllis Smith carrying the majority of the weight.  Poehler, whose performance is akin to a Leslie Knope squared, and Smith make for a great pairing with each being a perfect counter balance to each other.  Richard Kind’s Bing Bong, Riley’s imaginary friend, shows up about half way through the film seemingly for comic relief but the character leaves a massive emotional impression.  Inside Out is that good of a film and destined to become a classic.