MOVIE REVIEW: SHADOW IN THE CLOUD 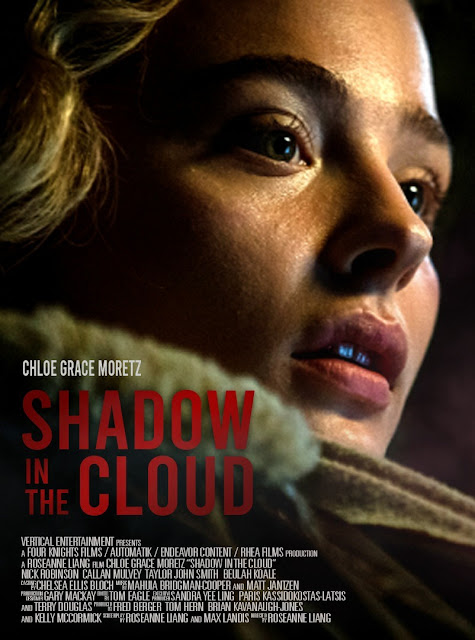 While travelling with top-secret documents on a B-17 Flying Fortress, a female WWII pilot encounters an evil presence on board.

Rated R for language throughout, sexual references and violence

There’s a clear point in Roseanne Liang gonzo Shadow in the Cloud where you’ll either check out or go all in with the nuttiness on screen.  Its first half is deliberately paced serving as a wonderful showcase for Chloë Grace Moretz talents.  She’s always been an engaging actress whose deserving of a bigger spotlight, this film isn’t nearly good enough to give her a solid boost.  The film itself is a hodgepodge of ideas mashed up into a strange B-Movie where Moretz’s character battles sexual stereotypes, gremlins, the Japanese and motherhood.   Once the film decides to go all in with it’s insanity, it’s best to throw any semblance of logic out the window because the film doesn’t care if any of what you see makes any sense.  You get the sense that in the hands of a better filmmaker there might be a better film in there somewhere.  Unfortunately Roseanne Liang, who heavily rewrote Max Landis’s original screenplay, just isn’t that talented as a filmmaker.  The 2nd half is clunky on various levels which leaves the movie feeling more like one of the nameless direct to video movies that pepper streaming services.  At the very least, Chloë Grace Moretz makes Shadow in the Cloud far more watchable than it deserves to be.