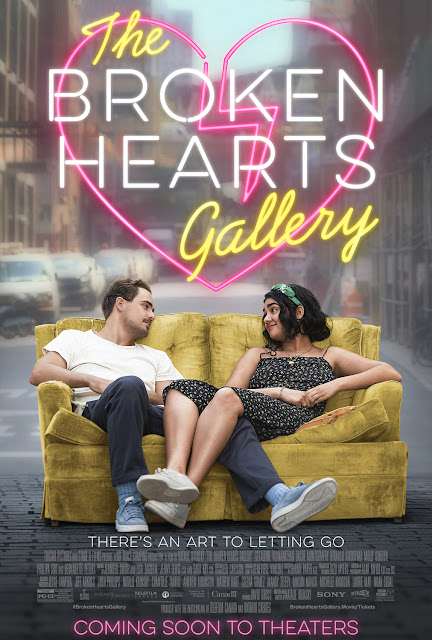 Dumped by her boyfriend, a art gallery assistant creates an exhibit for souvenirs from past relationships.

Rated PG-13 for sexual content throughout and some crude references, strong language and drug references

The Broken Hearts Gallery doesn’t reinvent the rom-com, in fact you won’t find many surprises here, but it’s successful because of endlessly charming star.  Natalie Krinsky doesn’t miss any rom-com tropes or turns but she’s smart enough to give her film a light breezy feel that makes it easy to like.  Her biggest weapon though is Geraldine Viswanathan and she makes great uses of her. Viswanathan has incredible screen presence and comedic timing; anyone who saw her in 2018’s Blocker shouldn’t be surprised.  Here she’s given the spotlight and she nails it from start to finish, making the film pop for the majority of the film’s runtime.  Her supporting cast is equally strong with the film really perking up when she is paired with her droll roommates/best friends played by Molly Gordon and Phillipa Soo.  Still a rom-com won’t work if the two leads don’t have chemistry.  Thankfully Geraldine Viswanathan and Dacre Montgomery, who set his dreamy meter to 11, have a playful but believable chemistry.  The cast makes the film worlds better than it deserves to be.  Personally I’ve never been the biggest fan of this genre because of how predictable they are, something that holds true here, but it’s a testament to how good this cast is that it’s easy to overlook most of the genres failings on display.