Cindy Prascik's Review of The Courier 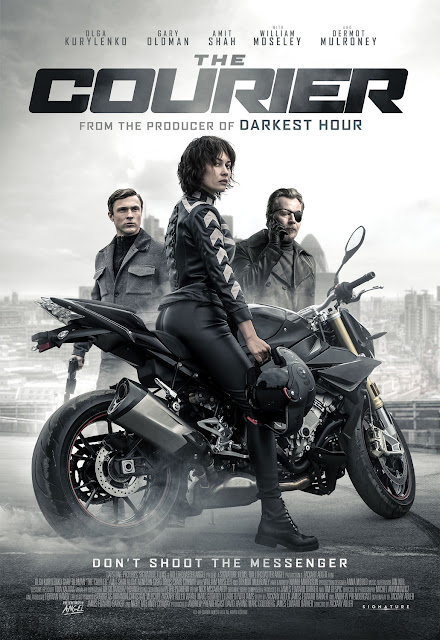 As COVID_19 Rules kept me confined to my own four walls on the High Holy Day of Gary Oldman's birthday last Saturday, I celebrated by watching the only Gary project I hadn't seen already, The Courier. I must say, his birthday deserved better.

Spoiler level here will be mild, nothing you wouldn't know from the trailer.

A London courier finds herself at the center of a plot to assassinate a valuable witness.

Gary Oldman is no stranger to taking sketchy projects for the paycheck; this is a well-documented fact. With an Academy Award under his belt (if you think it's ever NOT going to be mentioned, you're mistaken), I am equally impressed and disappointed that he still doesn't mind tackling a script that leaves me wondering how it ever got past his agent. The Courier is so very bad from the outset, I kinda wonder how it got past *anyone's* agent.

The Courier lays its groundwork broadly, through news clippings shown over the opening credits. Following is such a by-the-numbers outing that it's not only easy to guess every twist and turn, but I caught myself saying dialogue out loud before the characters did. (The beauty of home viewing, I guess?) Though the stakes are high, there's nary a hint of tension; it's that predictable. The film is as violent as you might expect, with plenty of up-close beatings and kills for your viewing "pleasure." Transitions among three primary locations — New York City, London, and Washington, DC — are choppy and awkward, and the acting can only be described as Shatner-esque. Gary gets a fair bit of screen time, though not nearly enough to make it worth enduring the rest. Two weird things that worked my nerves worse than the rest: the young woman who had her handbag on her arm at all times, even though she was mostly just walking around her house, and the guy who appeared to be channeling (poorly) Stansfield, Gary's character in 1994's The Professional.

The Courier clocks in at 99 minutes that feel like 99 years.  It is rated R for "strong violence, including bloody images, and language throughout."

Hollywood has already been trending towards the quicker release of bigger and better films for home viewing, and the current health crisis is only hastening that trend. Let's hope it will soon let movies like The Courier be mercifully lost in the shuffle.

Of a possible nine Weasleys, the courier gets one, for my Gary.