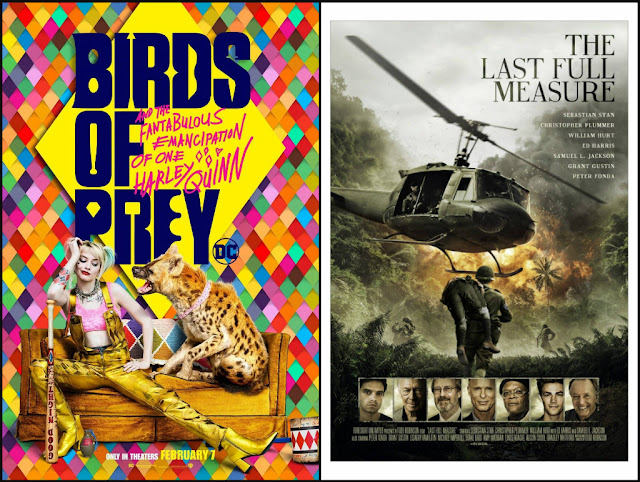 Despite the first real blast of winter rolling through my area this weekend, I was able to slip out to the cinema for Birds of Prey and the Last Full Measure.

First on my agenda, the film with the unnecessarily awkward and misleading name, Birds of Prey and the Fantabulous Emancipation of One Harley Quinn.

Following her breakup with the Joker, Harley Quinn struggles to make her way on her own.

Birds of Prey and the Fantabulous Emancipation of One Harley Quinn is misnamed in that it is mostly about Harley Quinn and hardly at all about the Birds of Prey, who pop up only sporadically throughout and not until the very end as a unit. Margot Robbie clearly is having the time of her life as Harley, as is Ewan McGregor as the film's psychotic big-bad. The rest of the cast is unremarkable, outside of Mary Elizabeth Winstead, always a rose even among thorns. Birds of Prey doesn't look half as good as the Gotham TV series as far as its production design and overall appearance and atmosphere, but there are a couple exceptional set pieces, particularly the climactic battle in a fun house. The movie makes great use of some popular tunes and features terrific score by Daniel Pemberton.

On the negative side, Birds of Prey is unrelentingly foul in both language and content. I'm a grownup and grownup content doesn't put me off, but the movie tries to shock for shock's sake and that's just boring. I find the character of Harley Quinn rather annoying, and this portrayal hasn't done anything to endear her to me. Much like the Minions--who are the best part of any Despicable Me movie but couldn't effectively carry a whole movie--a little Harley goes a long, long way. "Fun" is the word I've most often heard used to describe Birds of Prey, which for me frequently is code for, "It isn't very good but I liked it anyway." I can definitely see why people like this movie, despite it's not being particularly well done, and I'm grateful that solid reviews and good word of mouth should make it a win for DC, regardless of a (so far) sluggish box office.

Birds of Prey and the Fantabulous Emancipation of One Harley Quinn clocks in at 109 minutes and is rated R for "strong violence and language throughout, and some sexual and drug material."

While Birds of Prey and the Fantabulous Emancipation of One Harley Quinn is built of some great pieces, the whole is too dark to be fun and too silly (bordering on downright stupid at times) to be properly dark. Of a possible nine Weasleys, Birds of Prey gets six.

Next on the docket, the Last Full Measure.

A hotshot government lawyer is assigned (against his will) to review the case of an airman killed in Vietnam, whose brothers in arms are convinced he was wrongfully denied the Medal of Honor.

First and foremost, I would like to give props to my local theater for getting this movie. Even though the film is in wide-release, there doesn't seem to be much buzz around it and I was certain it would pass right by my small town. So, thank you, Marquee Cinemas, for screening the Last Full Measure.

Onward to the movie, beginning where regular reader(s) will expect: with Sebastian Stan. I've said it before and I'll undoubtedly say it again (and again): Sebastian Stan is the finest actor of his generation, and one of the finest actors I've ever seen. If you only know him as a Marvel guy, you are really, really missing out. (Shameless plug: Please check him out in the short-lived series Kings, which you can watch for free on the NBC app.) As a longtime fan, you can bet I was as proud as his mama to see his name at the top of the credits, his first real big-screen lead. This role hardly taxes his talent, but his character is the film's backbone and he serves it well. Most of the acting heavy lifting is left to the older cast members: Samuel L. Jackson, Ed Harris, William Hurt, Peter Fonda, and John Savage, but--while fine performances elevate the material--they can't really save it. The tone is overly sentimental and the script is pedestrian, at times so melodramatic as to be almost comical, which is a sad disservice to its subject. Having said all that, the film does put the spotlight on a very deserving hero, and the folks in my screening and the one before it were largely moved to tears. That's a movie that certainly gets something right.

The Last Full Measure runs 116 minutes and is rated R for "war violence and language."

Fangirl points: I mean, Seb, obviously, but Linus Roache was a nice surprise!