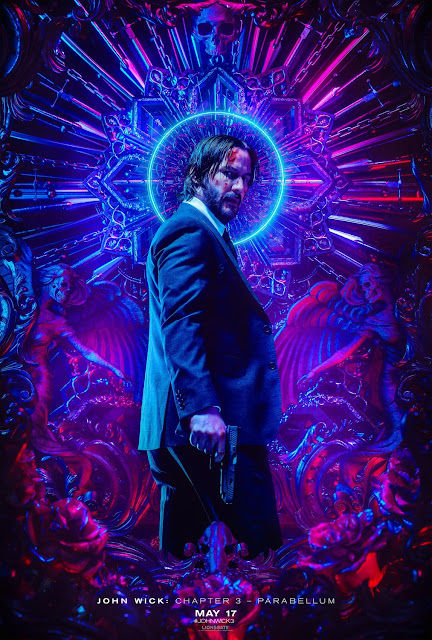 After gunning down a member of the High Table -- the shadowy international assassin's guild -- legendary hit man John Wick finds himself stripped of the organization's protective services. Now stuck with a $14 million bounty on his head, Wick must fight his way through the streets of as he becomes the target of the world's most ruthless killers.

Rated R for pervasive strong violence, and some language

John Wick: Chapter 3 – Parabellum somehow finds a way to up the ante on the action franchise.  It’s dance like choreography of the action sequences are truly something to behold.  Here director Chad Stahelski delivers a bevy of action set pieces that are just as jaw dropping and as they are audacious.  It’s a cornucopia of variety as well which keeps the sequences from becoming stale or repetitive.  Keanu Reeves is at the center of the whole thing of course and in his usual Reeves way he moves the film along even with the barebones plot.  The plot itself is strangely complicated and simplistic at the same time.  The story does open up the world and mythology but rarely gets bogged down too much keeping the focus on the action that everyone has come to expect from the franchise.  If there is a slight issue, it’s that this entry seems slightly more tongue in cheek than the previous entries.  The villain is an interesting take which may or may not work depending on how serious you prefer your big bad.  Ultimately, it’s not a major miscalculation because the film as a whole is just a load of mindless fun.  The visuals and choreography are the stuff of popcorn fueled dreams.  The door is left open for another sequel which would have a high mile marker to surpass.