Cindy Prascik's Reviews of We Have Always Lived in the Castle & John Wick, Chapter 3: Parabellum 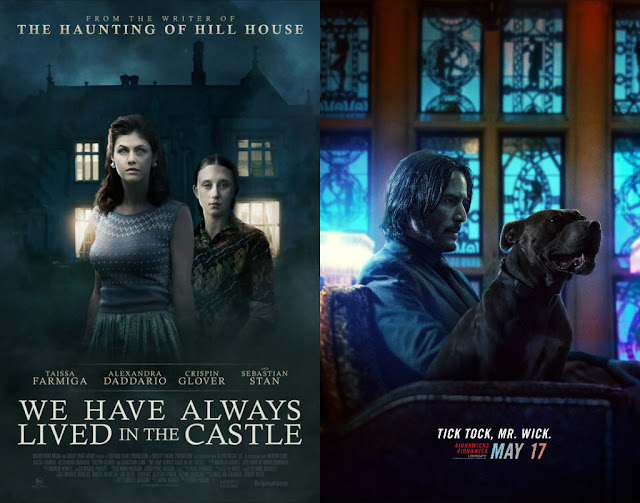 This weekend offered a home/cinema split double-bill of We Have Always Lived in the Castle and John Wick Chapter 3: Parabellum.

First on my agenda, a Friday-night home screening of We Have Always Lived in the Castle.

The reclusive life of two sisters and their uncle is disrupted when a mysterious cousin turns up on their doorstep.

We Have Always Lived in the Castle is an atmospheric thriller that should be properly creepy but, sadly, it's just rather dull. The story crawls along at a snail's pace, sabotaging any hope of achieving a menacing tone, and dropping its big reveal like an Acme anvil on Wile E. Coyote's head. There are some nice performances from Taissa Farmiga, Alexandra Daddario, Crispin Glover, and especially Sebastian Stan, and the film looks absolutely stunning, but that can't save it from being a bore.

We Have Always Lived in the Castle runs 90 minutes and is unrated. (The movie features adult themes and some violence.)

Next up, John Wick Chapter 3: Parabellum. Having been "excommunicated" for violating the sanctity of the Continental, John Wick finds himself on the run for his life, minus his support network.

When it comes to entertainment, a project being self-aware and being more than it has to be can be mutually-exclusive. Under normal circumstances, the best you can hope for is one or the other, but the John Wick franchise somehow manages to be both.

On the surface, John Wick is your garden-variety action series with a one-note lead, and you know what? It absolutely knows it's that. It is not pretentious in any way. It lets Keanu Reeves be Keanu Reeves. More than that, it absolutely *needs* Keanu Reeves to be Keanu Reeves. BUT...these films also boast some of the most exquisite production values you'll see on a big screen, masterful fight choreography, and crafty turns that almost never fail to surprise.

After taking out an enemy on the sacred ground of the Continental in Chapter 2, Chapter 3 finds John Wick in mortal peril and minus the network that, in the past, has provided his weapons, gadgets, intel, and safe haven. Amidst almost non-stop action, he finds exotic locales and new allies and adversaries in familiar faces such as Halle Berry and Jerome Flynn. Reeves is genuinely fantastic in the lead, perhaps not the best actor in the world, but the ONLY actor for this role. The movie finds its dry wit mostly in his deadpan reactions to extraordinary circumstances, and it always fits like a key in a lock, never forced or out of place. Parabellum maintains a terrific air of tension from beginning to end, though, if I have one small quibble this time around it's that some of the fight scenes do drag on a bit. They are beautifully and uniquely choreographed, but, with the movie running well clear of two hours, a trim here and there might have done it a favor. However, it's a very small complaint with a picture that otherwise is clever, engaging, and utterly glorious to behold.

John Wick, Chapter 3: Parabellum clocks in at 130 minutes and is rated R for "pervasive strong violence and some language."

Parabellum is another strong installment in a series that I truly hope goes on forever.

Of a possible nine Weasleys, John Wick, Chapter 3: Parabellum gets all nine.