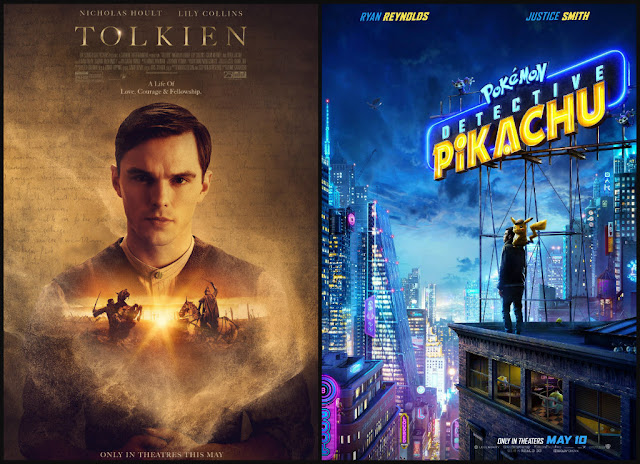 This weekend it was off to the cinema for the disparate duo of Tolkien and Pokemon: Detective Pikachu.

First up: Tolkien, chronicling the early years of one of the world's most celebrated and beloved authors. Regular reader(s) will know I make a point of not reading reviews until I write my own, but headlines I've seen in passing tell me most folks, including the Tolkien family themselves, don't like this movie.

Since the Tolkien family isn't noted for liking much of anything, I suggest putting that aside and giving the picture a fair shake. It's really not bad at all.

First we have a likable cast, fronted by Nicholas Hoult and Lily Collins. The material won't win anyone an Oscar, but the performances are quite enjoyable. There are plenty of nods to the things Tolkien fans will want to see...Balrogs and Nazgul and of course very powerful rings. These come mostly in the form of Tolkien's fevered battlefield imagination. Other influences come from Tolkien's real world, most obviously three close friendships formed in his school days. The references aren't exactly subtle, but the movie doesn't constantly beat you over the head with them either. Tolkien does not follow a linear timeline, but rather jumps back and forth between the author's school days to his World War II experiences and beyond. (It's worth noting that some of the war sequences do get a bit gruesome.) The film's meandering pace makes two hours seem a bit long, but it's an engaging enough story that it never lost my attention.

Tolkien clocks in at 112 minutes and is rated PG13 for "some sequences of war violence." If Tolkien isn't an especially memorable movie, it's a serviceable biopic that won't bore you, either. Of a possible nine Weasleys, Tolkien gets six.

Next on the docket, Pokemon: Detective Pikachu.

After his detective father is killed in an apparent accident, a young man happens upon the father's Pokemon partner and a mystery involving the two.

If Pokemon: Detective Pikachu were the worst movie ever, it would have every right.

The concept feels pretty thin, and little--if anything--I've seen at the cinema lately has been as jarring as Deadpool's voice coming out of that adorable little Pokemon. Curiously, though, each trailer got funnier and funnier, and, as it turns out, the finished product isn't half bad.

Let's start with Ryan Reynolds. Yeah...that voice probably still wouldn't be what I imagine for Pikachu, but this version of Pikachu is all Reynolds, and it's pretty hilarious. Justice Smith capably plays the straight man to Reynolds' wisecracking yellow cutie. Ryme City is loud and colorful and looks every bit the sort of bustling, progressive burgh where humans and Pokemon would live and work side by side. Action sequences are well choreographed and don't run on too long. The movie is great for kids, but there's a fair bit of grownup humor to entertain adults as well. Pokemon: Detective Pikachu runs 104 minutes and is rated PG for "action/peril, some rude and suggestive humor, and thematic elements."

Pokemon: Detective Pikachu is a fun movie that's a lot better than it should be.

Of a possible nine Weasleys, Pokemon: Detective Pikachu gets six and a half.