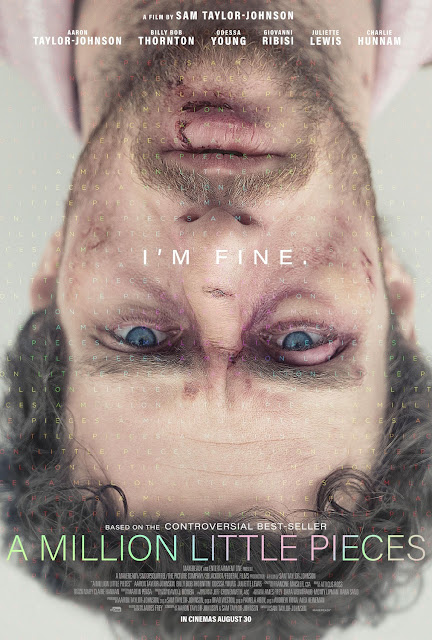 Thanks to less-than-enticing cinema listings and a sketchy weather forecast, this weekend I elected to seek out a new(ish) movie for home viewing. A Million Little Pieces (with Charlie Hunnam) was two bucks cheaper to rent than The Courier (with Gary Oldman), so I went with A Million Little Pieces. Dear reader(s), sometimes you get what you pay for.

Spoiler level here will be mild, if anyone cares, which you really shouldn't.

A young man with a long history of addiction lands in rehab and discovers that the best drug is Billy Bob Thornton.

Directed by Sam Taylor-Johnson and starring her husband Aaron Taylor-Johnson, the weighty subject matter makes A Million Little Pieces feel like a vanity project, the couple hoping to show off a bit with the serious material. Unfortunately, it's a superficial exercise, and the only thing it really shows off is Mr. Taylor-Johnson's not-so-little Mr. Taylor-Johnson. Yep, you heard me. In the first of the film's incessant attempts to shock for shock's sake, A Million Little Pieces comes right out of the box with the equivalent of a Hollywood unicorn: full frontal male nudity. (It also hits that beat again later on, for good measure.) Taylor-Johnson fronts a reasonably capable cast, including (as mentioned) Thornton and Hunnam, Hunnam's fellow Sons of Anarchy alum Ryan Hurst, Juliette Lewis, and one of my favorite "that guy who was in that thing" actors, David Dastmalchian. There's really nothing wrong with any of the performances, but there's not much anyone can do with the lame dialogue and paper-thin characters. The tale plays out predictably, fleshed out by clumsy flashbacks and punctuated with all the gross bodily functions a rehab story could ever need. The movie does such a poor job painting the lead character's picture that you might end up rooting for the drugs. If you're looking for a film that effectively depicts the layers of addiction and the challenges of recovery, well, you're gonna have to keep looking.

A Million Little Pieces clocks in at 113 minutes and is rated R for "drug material, language throughout, some graphic nudity, and sexual content."

If I had to think of one nice thing to say about A Million Little Pieces, it's that Charlie Hunnam looks really, really good for the ten measly minutes he's onscreen.

Next time I'll pay the two extra bucks for Gary Oldman. Of a possible nine Weasleys, A Million Little Pieces gets one. Until next time...