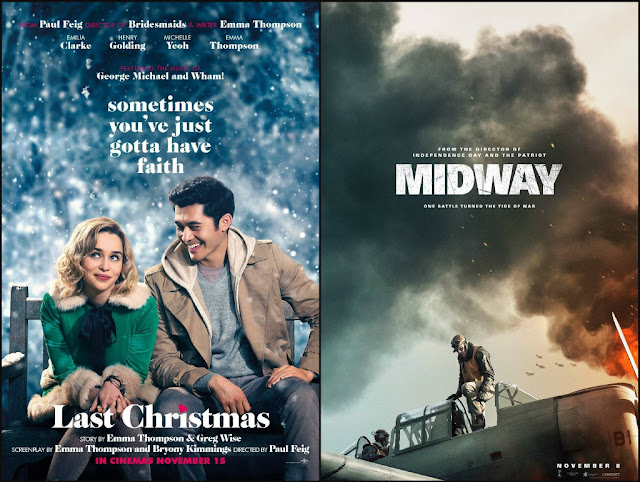 This weekend was a "because the schedule says so" weekend at the cinema. I really wanted to see Doctor Sleep, but the two-and-a-half-hour runtime, coupled with a wrench in its Saturday showtimes, left me with Last Christmas and Midway. Can we say "ho" and "hum?"

I think we can. Spoiler level here will be mild for anything plot-specific, but there's a general observation about Last Christmas that I think any fair review has to make.

First on my agenda: Last Christmas.

It's the holiday season in London, and a young woman who has made a habit of poor life choices hopes to get back on a good path.

Last Christmas is, in the words of one wise friend, Not A Cindy Thing (TM). The trailers sell a feel-good holiday romance/redemption story, maybe a step up from what the Hallmark Channel's going to be feeding you for the next month and a half. Dearest reader(s), I'm here to tell you: Last Christmas is quite a bit more than that, and I expect that's a double-edged sword. I've fallen a bit out of love with the cinema this year, and I was delighted to be reminded that movies can still surprise, even in the Internet age. Those who have their hearts set on straight-up warm holiday fuzzies might be less pleased with the picture's extra layers.

Last Christmas benefits greatly from the inherent charm that seems to permeate all British entertainment. Emilia Clarke has it in spades, and--even when she's at her worst--you find yourself worrying about the road our lead character is on. Once she meets swoon-worthy (relative) newcomer Henry Goulding, well, you'll be holding your breath, just waiting for true love to fix the mess she's made of her life. Co-writer Thompson is, as always, a scene-stealer with limited screen time, but the real star of Last Christmas is the music of George Michael. Much like Yesterday and Blinded by the Light, Last Christmas has made creative use of an iconic artist, and it is a delight to behold. The movie's festive holiday atmosphere is enhanced nearly to its breaking point by the fact that Clarke's character works in a Christmas shop and spends a good bit of the film dressed as an elf. Ho. Ho. Ho. It's a sharp, well-paced, funny, and moving film that's one of the cinema's happiest surprises of 2019.

Last Christmas clocks in at 102 minutes and is rated PG13 for "language and sexual content."

Last Christmas finds its way to some holiday spirit, but the trip doesn't take the road you expect. Of a possible nine Weasleys, Last Christmas gets eight.

The true story of the 1942 Battle of Midway. Midway is an incredible story that deserves far better than this broadly-drawn telling. The film boasts exceptional visuals, with sweeping aerial shots and magnificent panoramas of great ships. It is truly a feast for the eyes. Unfortunately, its physical beauty is no match for awkward dialogue, shameless posturing, exaggerated accents (plenty of growly Batman voices too), and a melodramatic score. Over-acting throughout is so extreme as to be laughable, and a bloated runtime makes even the tensest battle scenes seem plodding. It's easily-digestible "patriotism" for the chest-thumping set, and it is nowhere near worthy of the story it attempts to tell.

Midway runs 138 minutes and is rated PG13 for "sequences of war violence and related images, language, and smoking."

If you'd have told me Midway would somehow be the worse of the two movies on my agenda yesterday, I'd have said you were crazy, but...here we are.


Of a possible nine Weasleys, Midway gets four. Fangirl points: Luke Evans! (And if I had to say something really nice about the movie, it only made me wait eight minutes for him to turn up.)

This Veterans' Day/Remembrance Day weekend, I would like to say thank you to all those who serve and have served, whose bravery and sacrifice make it possible for me to sit here and make fun of a movie that tells their story so badly.

I remain in your debt. Until next time...