Cindy Prascik's Review of The Laundromat 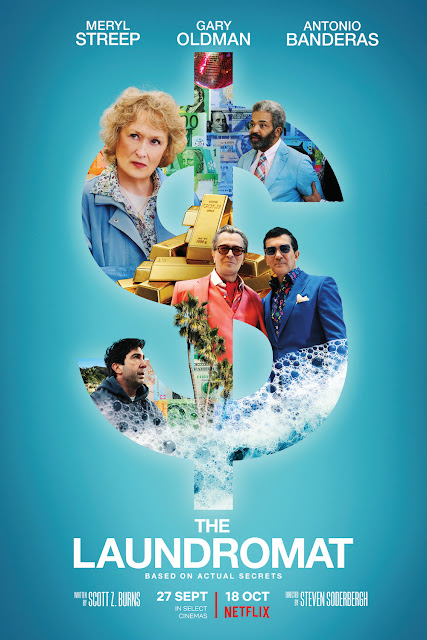 Construction having made local traffic an almost insurmountable headache, this weekend I again leaned on Netflix' original content so that I would have something to write about for you--yes, YOU--dear reader(s).  Our film of the week: Cautionary tale the Laundromat.

A woman widowed in a freak boating accident experiences firsthand the duplicity of big insurance and the networks that support it.

Oscar winners Meryl Streep and Gary Oldman (yes, I'm always going to remind you he's an Oscar winner now) head a decorated cast that also includes Antonio Banderas, James Cromwell, Robert Patrick, Jeffrey Wright, and Sharon Stone, as well as a host of other familiar faces. Many appearances amount to little more than cameos, and you get the feeling the Laundromat's message is important enough that some pretty impressive names just wanted to be a part of it. So, why does it seem like Netflix is burying this picture? I mean, when I log on, the first thing it suggests is that Breaking Bad movie that's a week old already. (Sorry, Netflix, that's a no go.) I had to do a full-on search to get a Netflix original STARRING MERYL STREEP to even show up. Sure there were some legal hassles over this picture, but those were resolved in Netflix' favor. I think the problem here is that--for all its star power--the Laundromat is a barely average movie.

Starting with the positives, the Laundromat's talented cast does a terrific job with the material. Streep is heartbreakingly perfect in the lead, as of course one would take for granted. Oldman and Banderas are fantastic together, a pair of slimy lawyers telling their "side" of this based-on-actual-events tale. Each familiar face that turns up in a smaller role is a nice surprise that makes the movie worth watching, despite its flaws. The story itself is compelling, and it's told here with grim humor. You'll feel dirty for laughing at it, but laugh you might. The attorneys serve as narrators, and their spin gives the picture a different vibe. I doubt it will make anyone sympathize with them, but it's a clever enough turn. The movie transitions with animated frames that also give it a lighter feel that it might have had otherwise; in fact, the whole has something of a theatrical sense to it. On the flip side, the Laundromat is extremely heavy-handed with its message and--while I'd agree its lessons warrant firm and regular reinforcement--that doesn't do the movie any favors. The film moves slowly, and there are very few likable or sympathetic characters, ultimately making it rather a tedious exercise that feels like a poor man's Big Short.

The Laundromat clocks in at 95 minutes and is rated R for "language, some sexual content, and disturbing images."

The Laundromat has an important message that might have been more impactful if its story were more deftly told.

Of a possible nine Weasleys, the Laundromat gets six.