Cindy Prascik's Review of The Secret Life of Pets 2 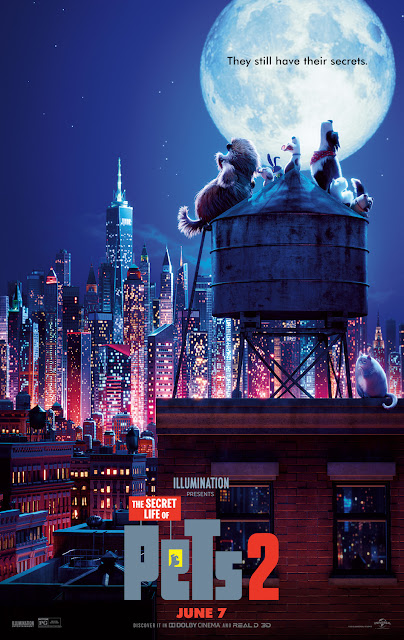 Yesterday I preceded my day-long Rocketman festival with an early screening of the Secret Life of Pets 2.

This review will include some very specific spoilers that--as a pet mom and animal lover--I feel obligated to mention. However, I will put them at the end after the rating, with a warning, for anyone who wants to read to that point for a general overview.

The Secret Life of Pets 2 revisits our old friends from the first installment, sending them in mostly different directions, adding new friends and adversaries, and giving us a movie that feels a little disjointed.

The Secret Life of Pets 2 features three separate plotlines, two of which converge at film's end, and one that mostly stands on its own. It's not really a problem, but it does make the whole seem a bit jumbled. That aside, pieces of the movie are laugh-out-loud funny. If the dogs are broadly drawn, the cats are spot on. These writers, they're cat people! The art and animation are sharp and colorful, and a cheerful score is peppered with familiar tunes sure to appeal to young and old alike. Kevin Hart's voice work as the unhinged bunny Snowball is again the movie's highlight, and this time he's playing off a familiar costar, Tiffany Haddish, a new addition as Snowball's puppy pal, Daisy. This is a fun outing that doesn't overstay its welcome, making the movie’s shortcomings easy enough to forgive.

An aside: This was my first experience with a sensory-friendly movie screening, and I want to give props to my local theater, Marquee Cinemas, for offering this option. The film itself is unaltered, but the volume is lowered, the lights don't quite go all the way down, and there are subtitles on the screen. This screening also skipped the trailers. It was a good experience that seemed to go over well with its target audience, and it did my cold heart good to see kids who mightn't otherwise get to experience the cinema enjoy a movie.

The Secret Life of Pets 2 runs a quick 86 minutes and is rated PG for "some action and rude humor."

The Secret Life of Pets 2 is nothing special, but it's a fun enough summer outing to get folks by until Toy Story 4 hits screens in a couple weeks.

Of a possible nine Weasleys, the Secret Life of Pets 2 gets five.

Hereafter there be spoilers!

I have never been a person who blames people's behavior on entertainment; on the contrary, I greatly value personal accountability. However, when it comes to anything targeting children, I do think we need to be careful what we put out there, and this movie does a few things that bothered me.

Near the beginning of the movie, there's a scene of a baby pulling on a dog's ears and tail. In the real world, this is how children get bitten and innocent animals get put down. Pets are not toys. This cannot be stressed enough, and it's no joke.

In one scene the little dog Gidget is using the dishwasher as a sauna. A silly enough gag, but how long until somebody's child puts a small dog in the dishwasher, much like kids were flushing fish down the toilet to “set them free” after seeing Finding Nemo? The movie loses nothing without that scene, so just don't do it.

Finally, in one plotline, the apartment-dwelling Max and Duke visit a relative on a farm, and are told, "Dogs sleep outside." Decent people don't make dogs sleep outside, and decent pet owners don't bring their dogs to places where they aren't welcome indoors. I docked this movie a full Weasley point for that one.

PPS: Go see Rocketman, will ya?