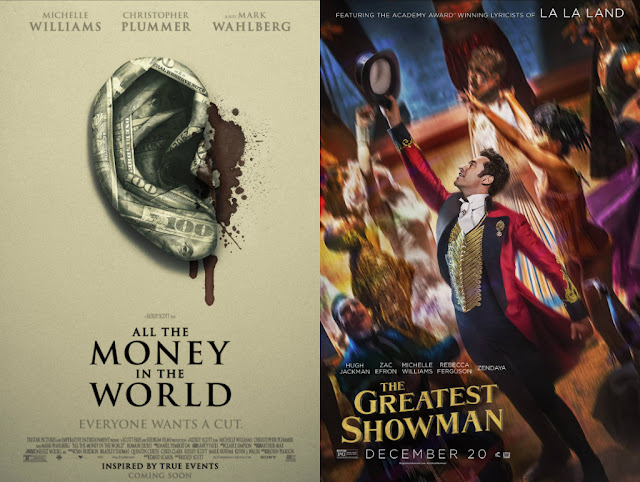 Dearest Blog: Yesterday it was off to Marquee Cinemas to close out the busy movie week with All the Money in the World and The Greatest Showman.

First up: All the Money in the World.

Inspired-by-true-events tale of the kidnapping of JP Getty, III, and his mother's desperate attempts to secure his release.

Let's see, dear reader(s), where do we start with this one? Well, I was pretty young at the time of the Getty kidnapping, so I remember enough to have known the outcome, but not enough to say how many liberties are taken along the way in this telling of the story. I'm not sure if being aware of the ending contributed to the movie's seeming rather long and slow, but long and slow it certainly does seem. It's never dull, but I was still pretty happy when it finally cruised to its conclusion. The eldest JP Getty appears, at least from this depiction, to be so loathsome an individual that it hardly would have been a disservice to him to have allowed his portrayal by a sexual predator to remain in the film, though of course it would have been a great disservice to everyone else. The movie suffers no ill effects from hasty re-shoots necessitated by the Kevin Spacey controversy; on the contrary, Christopher Plummer's solid turn as as the cantankerous old billionaire is woven seamlessly into the picture. Charlie Plummer (no relation) is also great as the young victim, but it's Michelle Williams who carries this movie with such extraordinary skill that you'll scarcely be able to take your eyes off her. Mark Wahlberg seems miscast as Getty's right-hand man/security expert (spoiler alert: putting glasses on a guy doesn't actually make him seem smart), but he's a likable enough actor that I didn't mind. As mentioned, the movie is deliberately paced and somewhat overlong, but the the kidnapping and surrounding events are nerve-wracking enough that I doubt anyone could be bored with it. There's a bit of up-close and personal violence/gore that may be a little much for some viewers.

Daniel Pemberton's subdued score and cinematography by the brilliant Dariusz Wolski set an appropriately somber tone for this sad and scary story.

Of a possible nine Weasleys, All the Money in the World gets six.

Next on the agenda: The Greatest Showman.

A heavily-fictionalized musical account of the rise of PT Barnum.

Yet again I found myself with a bit too much time between flicks yesterday, and happened upon a negative article beating up on The Greatest Showman for its rose-colored-glasses version of Barnum.

It was difficult putting it from my mind once the movie started, but movie's sunny demeanor and lively tunes ultimately won the day.

Hugh Jackman is a treasure unmatched in 2017 Hollywood. Top-notch at acting, singing, and dancing, no picture ever has to make allowances for his weaknesses; he doesn't have any. The Greatest Showman is a lightweight film that doesn't remotely tax his skills, but it's thanks to him the movie is elevated from entertaining-but-forgettable to something special. Zac Efron continues to surprise with each new role, a gifted and eminently watchable young talent. If I was dazzled by Michelle Williams in All the Money in the World, The Greatest Showman was quick to remind me why I usually loathe her; her simpering smiles and silly twirling wear thin very quickly. The "circus" players do a fine job and all seem to be having great fun with their limited screen time, and the remaining supporting cast is peppered with familiar faces that are more than up to what little the film asks of them. La La Land composers Benj Pasek and Justin Paul have again provided tunes lacking any real flair, but The Greatest Showman's musical numbers make an impact with interesting choreography and eye-popping costumes, hair, and makeup, along with Jackman's irrepressible charisma. The story is hokey at times, as many great old-school musicals are, but if this version of PT Barnum is an upgrade from the real deal, the film itself keeps pace with a positive, inclusive tone that is more than welcome at the end of a divisive, difficult year. The Greatest Showman is pure joy onscreen, the very definition of can't-miss cinema.

The Greatest Showman runs a quick 105 minutes and is rated PG for "thematic elements, including a brawl."

The Greatest Showman’s opening number includes the line, "All that was real is left behind," a perfect setup for the most magical bit of movie humbug I've seen all year.

Of a possible nine Weasleys, The Greatest Showman gets eight and a half.