Cindy Prascik's Review of Knives Out 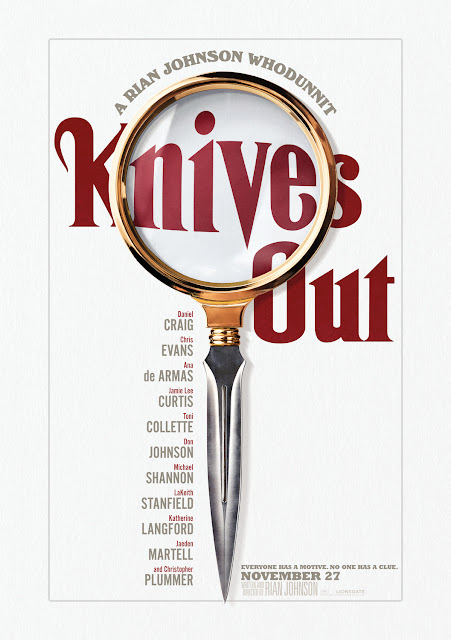 This weekend the cinema offered one of my most hotly-anticipated titles of the year: Rian Johnson's Knives Out.

When a well-to-do author dies a suspicious death, a private investigator attempts to unravel the case while the millionaire's family fights over his estate.

Knives Out is a proper, original murder mystery, with a layered story and plenty of clever twists to keep the audience engaged. Set almost entirely in a Clue-like old mansion, the atmosphere is almost equal parts lush and creepy, with a healthy side of humor. The all-star cast includes such luminaries as Jamie Lee Curtis, Christopher Plummer, Michael Shannon, Chris Evans, Daniel Craig, LaKeith Stanfield, Toni Collette, and Don Johnson. Most are very good, with Evans turning in a particularly fun performance. Collette, unfortunately, is woefully miscast to the point of being distracting. Neither mattered as much to me as having Don Johnson on my screen. Knives Out is deliberately paced enough to border on too slow, making the two-plus hour runtime seem somewhat longer, and there's an uncomfortable political interlude that serves a purpose, but (for my money) not enough of a purpose to justify what it costs the picture. Overall, I didn't love Knives Out as much as I'd hoped, but--without spoiling any particulars--I think that's more down to it not playing out as I'd have liked than to any shortcomings as a film.

Knives out clocks in at 130 minutes and is rated PG13 for "thematic elements including brief violence, some strong language, sexual references, and drug material."

Knives Out is a sharp, darkly funny mystery that can rightly be counted among the year's best movies. Of a possible nine Weasleys, Knives Out gets eight.

Fangirl points: In addition to Gordon Lightfoot's "Sundown" featuring on the soundtrack, Knives Out name-checks the musical Hamilton and the movie Baby Driver. Win/win/win. Also, in case you missed it before: DON JOHNSON.