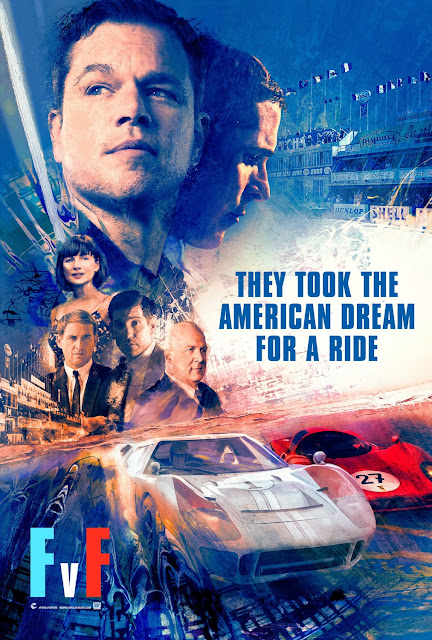 American automotive designer Carroll Shelby and fearless British race car driver Ken Miles battle corporate interference, the laws of physics and their own personal demons to build a revolutionary vehicle for the Ford Motor Co. Together, they plan to compete against the race cars of Enzo Ferrari at the 24 Hours of in in 1966.

Rated PG-13 for some language and peril

Ford v Ferrari an interesting throwback film that’s got so much more going on besides racing.  James Mangold directs his film with a glossy veneer that just screams prestige picture.  A two and half hour film needs to be engaging to keep from becoming a slog.  Thankfully, the film’s story is thoroughly entertaining throughout, so much so that if rarely feels slow.  Having a cast of top level talents all delivering excellent performances.  Matt Damon gives his Carroll Shelby a good old boy charm and dogged determination which shines through an understated delivery.  Christian Bale delivers another physical transformation for this performance but beyond that he gives his character a likable stubbornness that provides the film its beating heart.  Together Damon and Bale make this bromance work and it’s incredibly watchable.  The supporting cast is equally strong with Tracy Letts, Jon Bernthal and Caitriona Balfe all leaving their mark in limited screen time.  On its surface, the film is about winning a car race but peeling back some of the layers reveal a beefier and headier story at work about creation, invention and innovation.