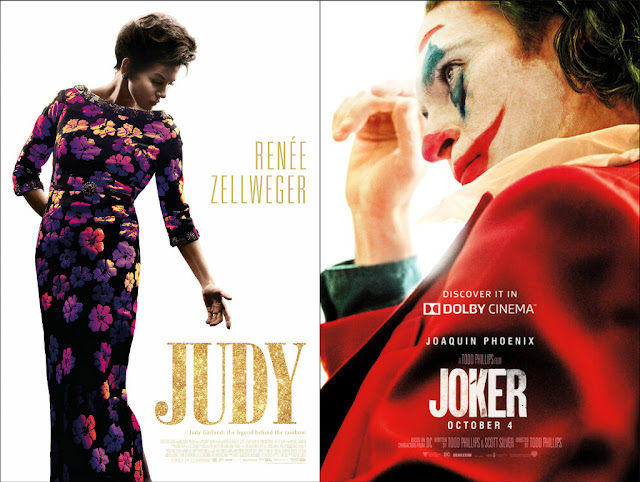 This weekend it was off to the pictures for a pair of acting powerhouses: Renee Zellweger's Judy and Joaquin Phoenix' Joker.

Spoiler level here will be moderate, nothing plot-specific, though I will make some general observations that may be considered spoilery.

First on the docket: Judy. In desperate financial straits, a failing Judy Garland agrees to a series of shows in London.

Judy focuses on a few weeks towards the end of Judy Garland's life, when she accepted a London residency in an attempt at career and financial salvation. It's a very obvious film in every way, a clear awards-grab by Zellweger in a not-so-deftly-told "perils of fame" story. It is elevated by the icon whose name it bears, and by Zellweger's extraordinary performance, but beyond that its emotional wallop turns out to be the worst sort of Hollywood fakery. Zellweger is physically transformed into the aging Garland, her slightly-slouched posture barely diminishing the diva of younger days. Though Zellweger is a capable singer, and it's all her voice in the film, most of the numbers are lip-synched rather badly on camera. The story moves steadily, but feels a bit slow. It is expectedly difficult to watch the worst of Judy's struggles, and quick flashbacks to the abuses visited on the young star by MGM shed a painful light on her later dependency on drugs and alcohol. A moving scene with a pair of fans at the stage door is, to me, the film's shining moment, and finding out afterwards that it--as well as the climactic final scene--was fabricated was a great letdown. While both were meant to "represent" real, pivotal parts of Ms. Garland's life, learning they were entirely made up very much diminished the movie's emotional impact for me. Comparing with Rocketman for a moment, if your story is billed as a musical fantasy, you may do pretty much as you please. If your movie is sold as a straight-up biopic (see also: Bohemian Rhapsody), making stuff up just pulls the rug out from under it.

Judy runs 118 minutes and is rated PG13 for "substance abuse, thematic content, some strong language, and smoking." (She is literally NEVER without a cigarette!)

Judy is worth seeing for Renee Zellweger's exceptional work, but it is otherwise a by-the-numbers biopic you'll soon forget.

Next on my agenda (finally!), Todd Phillips' Joker. A troubled loner hits his breaking point.

Much had already been made of this dark origins tale before the film was even released, and, as I'm a week late seeing it, I doubt I have much to add that hasn't been said already, BUT...when has that ever stopped me?

Though the Joker is, arguably, DC's most iconic villain, there is no obvious DC branding to be found in this film. It's clear from the outset that Joker isn't intended as a comic book movie, or as part of a super-hero universe.

It's a miserable story about the effect hard times can have on anyone, particularly those less mentally-capable of facing what the world throws at them.

Joaquin Phoenix is considered a shoo-in awards contender for his work in the lead, and his performance is truly mesmerizing. He can't have Taron Egerton's Oscar, though, and that's that. Sorry, Joaquin. Phoenix' body appears ravaged for the role; he's painfully thin, with his ribs and shoulder blades protruding so much it almost hurts to watch. Heath Ledger's Joker had a fluidity of movement that was one of my favorite things about his performance in the Dark Knight. Here Phoenix adds a harsh edge that makes his every move look like a painful sort-of dance, elegant in its ugliness. His portrayal of Arthur Fleck's condition--a coarse laugh that is often entirely at odds with both his mood and the situation--is absolutely chilling. Grim production design and a somber score accentuate the film's sense of hopelessness and foreboding. Who wouldn't be driven to extreme measures by such circumstances? Certainly the movie borrows heavily from some that have come before, but it's mostly effective despite being derivative.

That being said, Joker has its problems. It plods through one depressing scene after another at a snail's pace. I understand it's meant to be dark, but there is literally NO light here, no hope. The film plays hell with the canonical timeline, with a very young Bruce Wayne making a brief appearance opposite Phoenix' decidedly middle-aged Joker. (There's not so much as a hint of a Bat.) A cold, self-centered Thomas Wayne (played by the always wonderful Brett Cullen) doesn't resemble any other Thomas Wayne I know. While the picture carries an important message about the way we, as a society, sometimes dismiss mental-health issues, it is very heavy-handed with its delivery. A weird scene backed by Gary Glitter's Rock n' Roll Pt. 2 is almost bizarre enough to absolve the movie of all its other sins, but not quite.

Joker clocks in at 122 minutes and is rated R for "strong bloody violence, disturbing behavior, language, and brief sexual images." (They’re serious, folks. This isn’t one for the kids.)

Joker may be a character from the pages of a comic book, but there's nothing cartoonish about the ugly world portrayed in this film. Of a possible nine Weasleys, Joker gets seven. And, for the record, I haven't seen a double-bill this depressing since I watched Dallas Buyers' Club and Twelve Years a Slave back-to-back.

Fangirl points: Hey you guys, it must be Awards Season because heeeeeeere's Shea Whigham!